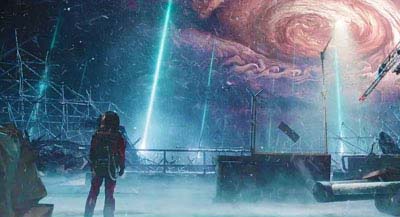 There’s good news and bad news. I’ll start with the bad news, they’ve learned how to imitate our shitty action movies very well. This means more horrible franchises could get the Chinese to invest as partners in more awful Transformers and Fast & Furious schlock. Michael Bay could be replaced by a Chinese dude who’d work for scale! The good news is much better though. Our fear about them being superior to us in such Sciences as Physics, Math and Astronomy has been overblown! More below on why.

Here’s the premise. It’s a doozy from a short story by a Chinese author, maybe stolen from an episode of Doctor Who or the minor element from Larry Niven’s old-fart-sex-romp Ringworld.

In the near future, the Sun will eventually swallow up the Earth in about a century. All the governments of the world unite to build numerous engines to…

And before I hear/read the tired old cliché…”but it’s just a movie,” give it a rest! Disinformation and ignorance have often been disseminated through entertainment. Key example I know about is via my friends who are lawyers; all those NCIS shows old people lap up like cocaine at Charlie Sheen’s bachelor parties, spread the lie on how precise Forensics technology is. It doesn’t just stop with influencing juries, even the cops think such bullshit is possible which then undermines the case to put real criminals in prison. The other one in my lifetime is explosive decompression in space, see Outland. It’s a horrible way to die but being exposed to the vacuum of space is more accurately demonstrated in Event Horizon and Sunshine.

Is Wandering a Manchurian Candidate plot to make us dumber in Physical Science? No, St. Reagan and the GOP beat them to the punch 40 years ago in a process I call The Dumbening. By cutting funding to Education and continuing America’s long tradition of bullies being put into power for their athletic prowess, was way more effective than any movie could ever be.

I’ll put aside further tirades at the end by ripping off Dr. Plait’s Bad Astronomy.

With the exposition resolved, the story becomes more personal as taikonaut Liu Peiqiang says his farewells to his young son Qi and father-in-law Zi’ang. Peiqiang has been selected to be aboard the spacecraft with a 200,000-mile head start to assist Earth on its long journey. When his multi-year shift ends, he will be allowed to return and finish his days amongst his family. Seventeen years later, the Earth is nearing Jupiter which is a critical juncture for the whole plan. Earth will get close enough to Jupiter for the traditional speed boost our past probes have received. This robs Jupiter a minuscule amount of its rotational energy making it easy for Voyager 1 or Cassini. The Earth will be trickier because the biggest known planet doesn’t have any moons close to our world’s mass and I bet if did this successfully, we could slow Jupiter’s 10-hour rotation/day down by a noticeable amount. Need to find a Physicist to see.

Obviously, things don’t go according to plan or there’d be no movie; as Earth is reaching the ideal point to get a Jupiter boost, numerous engines begin to fail. Without the constant acceleration the engines provide, Earth will disintegrate when it reaches Jupiter’s Roche Limit and farewell to the human race. Coincidentally, an young adult Qi has taken his adopted sister Han Duoduo on a joy ride to the frozen surface using grandpa’s truck-driving credentials. The trio (Zi’ang has to bail them out from jail when they’re discovered by miners) get conscripted into a special commando group to install a new starter for the engine at Hangzhou. All the military and scientist tropes are present plus a half-Australian convict they met earlier. From there you will see selective Physics at work (earthquakes, drops in air pressure causing planes fall out of the sky) while the heroes travel at the speed of plot to jump-start the engine in their area. Guiding them along the quest is Peiqiang from the spaceship all while trying to mend his broken relationship with his son.

Is it entertaining? Mildly. About on par with the bane of all Astronomers, Armageddon. I don’t speak Mandarin so I can’t tell if the acting is any good. The action is fair, in that, I’ve seen this before. It’s nice to see China doing something beyond period pieces and Kung Fu. I do hope to see them try more Sci-Fi. Films not being critical of Xi’s dictatorship or the “Communist” oligarchy will always be a factor; despite all those NeoLiberal and GOP shitbirds who thought Capitalism would make China more democratic and open. The Soviets made some good stuff before the USSR collapsed, Solaris is well loved and George Clooney did a remake around 2002. I give Wandering a B for effort yet it’s a D- film in league with Michael Bay and his “Capitalist” ilk.