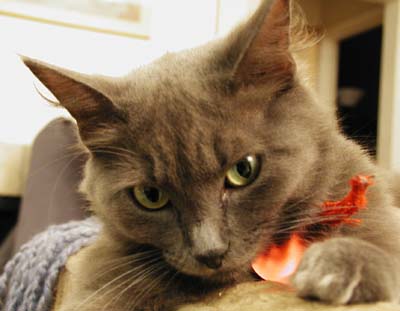 We were a two-cat household in what would be our last apartment (Wicca and Molly) and the house was underway. Near the complex was a feral cat colony, most likely in the small wooded area. Last Christmas, Somara rescued a big black cat who was crying for help. We named him Mongo due to his size, strength and general loyalty. After his neutering, Somara had a co-worker who took Mongo in. There he would spend his days living in a barn, becoming best friends with a horse. Ergo, what we did for Mongo was going to be the ongoing plan because Molly bullied other cats and Wicca was the victim. 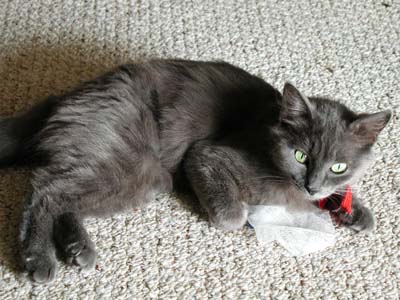 Fascination with a dryer sheet.

Meeting Miette and Her Arrival

As Spring rolled into Austin, I decided to have a late Saturday night dinner with a friend and while I was waiting for him to show up, I spotted this skinny cat hanging around the parked cars. Unlike many, she responded to my offer to pet her. The poor thing was rail thin, ribs protruding yet she had this cheerful disposition. I took her back to the apartment, asked Somara for some spare food and then we proceeded to follow the Mongo Plan…or so we hoped. In the spirit of Blazing Saddles, her interim name was Lily but Somara thought it didn’t fit. Sadly, it’s the only female character in Mel Brooks’ comedic masterpiece.

Before we could go forward with the Mongo Plan, poor Lily caught a whiff of some tomcat while I went on a work trip to Phoenix. Somara and the other cats had to endure Lily’s howling, it really wasn’t too different from her normal voice. It drove Somara crazy since the amorous mewing was more frequent at night; made it hard for her to sleep, I had missed out the worst by the time I returned. When the hormonal issue subsided, Lily was taken to the the veterinarian near our future house. It was a new practice, making her an early patient. Afterwards she had to stay with us while she healed.

Like some cats, Lily was fascinated by the missing fur and often showed it off to us. 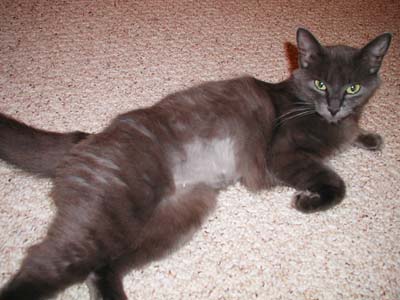 During her healing, Lily turned on the charm and wormed her way into my heart. Initially Somara was irked by my request to have a third cat. I think I won the debate by pointing out how we could do as we pleased once we’re moved into the house (the covenant allowed four cats). I wasn’t dissatisfied with Molly, I just foolishly thought Molly would mellow if she had a “sister” near her age. Part of Somara’s capitulation was renaming Lily and so I dubbed her Miette (French for “crumb”) due to how much she reminded me of the little girl thief in a French movie called The City of Lost Children. This cat’s proclivity to tear open bags of food was a huge motivator in the thief designation.

Miette seemed to also know she was adopted by the way she taunted poor Wicca. Molly preferred to charge at the elder black cat. Miette employed this funny hopping tactic to assert her status but Molly remained the boss, Miette kept her distance.

We quickly learned about some odd habits Miette brought into our household within a couple months.

Miette’s crowning achievement came years later and it involved Molly’s special diet. If you don’t remember, Molly had a bladder infection resulting in her receiving different, more expensive cat food for the remainder of her life. Dr. Riggan warned us the other cats would be drawn to it thanks to the stuff’s higher fat content, something cats can smell. We often had to shoo the others away to go feed Molly separately in the bedroom and it meant the buffet days were over; a schedule of morning and evening meal times were enforced. One Sunday afternoon, we initiated the ritual. Molly trotted off to the bedroom knowing we’d bring her dinner, closing the door behind us and returning in 30 minutes. The other three headed to the kitchen where they’d receive their “lesser” offerings. About ten minutes in, we realized Miette was nowhere to be found. We were going through the motions and didn’t notice Miette not rushing to the kitchen with Nemo and Kuroneko. I began to panic. Somehow she got out of the house! Where was she? Was she safe? Immediately I went outside to comb the streets. My phone went off about 20 minutes later. Somara told me how Miette never left the house. The little stinker figured things out so she hid under the bed, waited for Molly to finish and then snuck out to eat the more expensive chow. Somara witnessed the whole thing. We didn’t laugh until later. 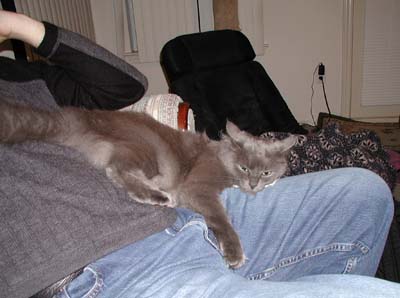 This is MY lap!

When Miette Finally Adopted Me

Miette was a sweetheart from day one but to some extent she was distant compared to Molly. Miette didn’t like to be picked up and cradled, Molly endured and then would tell when time was up via an irked meow. This gray cat was a spider monkey of resistance. She also preferred to sleep on the couch while Wicca and Molly took spots on the bed. Then one night as I was getting ready to nod off, Miette hopped up on my chest and began to purr as I stroked her long fur. This became our longtime routine for a decade, Molly permitting, the alpha cat got petting time first.

Her obsessiveness evolved into numerous photos Somara took whenever I fell asleep watching TV or whatever. Miette demanded my lap and went to very odd extremes to have it. She was like a little cat yoga guru. Again, only if Molly was bored with me would she proceed.

Nemo: I’m not touching you.

Relations With Other Cats

Miette was mostly mellow with all the other cats in the house or yard. Her taunting of Wicca eased as she aged. Molly she stayed clear of until there was the shift in power under Queen Kuroneko. Isis and Kuroneko tended to ignore her too. Nemo was the only cat Miette had friction with. Why? I could never put my finger on it beyond him coming into the picture after her. Nemo often got under Miette’s skin by whining or bopping with his “lucky” paw. This resulted in Miette hissing, folding her ears back and/or smacking Nemo in the face. Days later they were grooming each other or sharing space on the bed. 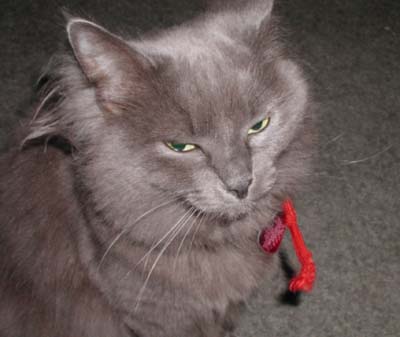 Sadly, old age didn’t go well for Miette neither. We noticed her weight loss and at her annual the vet said it was her thyroid. When cats reach eight, some have their thyroid ratchet up and they burn more calories than they take in. Nevermind cats spending long stretches lying around as predators are prone to do. Neither option was attractive. The first was radiation with no guarantee to its success at $1500. The second was medication to put the gland in check, also with a poor chance. I stupidly went with the latter and obviously it failed.

At first Miette became rail thin yet seemed normal in her behavior. Eventually she became a voracious eater but only in small, frequent doses. Mats in her fur developed. We had to pull/cut them out, giving Miette bald patches in various areas. In the final weeks, her eyes became cloudy which meant partial blindness and she stopped sleeping on the bed at night, preferring to spend her nights alone on the couch or floor.

Somara began to insist I schedule Miette’s euthanasia. I couldn’t bring myself to do it, besides, she was going into a routine and I figured my little kitty would provide a more clear message. On her last day, Miette sort of did that morning, she wasn’t hungry. However, we were too preoccupied with a day of errands and upon our return, I noticed she wasn’t at the food dish with the other three. I spotted her in the living room, lying by the footstool. I rushed over and I discovered poor Miette had expired that day. Somehow her claws got stuck in the furniture and I think she had a stroke in her panic to free herself. I bawled for quite a long time. I blamed myself for not letting Miette have a more dignified finale, or more accurately, putting it off, thinking she was tougher. Fortunately our pet hospital was still open and we had her remains taken care of. The card I received from the staff, especially Dr. Riggan was very moving.

Aftermath and Her Legacy

Miette’s ashes are with us, joining Wicca, Molly and a kitten named Sean who passed on our porch. We’re behind on our shrine.

This time, I am sticking to the promise of not replacing her. We’re down to three and the long-term goal is no more than two; I guess cats are the original Sith Lords.

Miette will live on as an additional name on the charity I established in Molly’s name at White Rock Vet Hospital. Although she was a feral cat, keeping their population in check is very important. I’m not concerned about what cat’s prey on, Science has been discovering that cats have been living off her garbage more than rodents, birds or bugs. No, I worry over coyotes eating them, inattentive motorists and there’s always a sliver of human who enjoy harming animals, especially cats. By helping others cover the expense of neutering their cats or un-adoptable ones, it lengthens their lives a couple years and curbs their aggression. There’s also the reproduction issue. Our youngest, Isis, proved how rapidly their numbers grow if they’re left to their own devices. Before adoption, she had 11 kittens within less than two years and nine made it to adulthood.

Along with Molly, I will continue to miss Miette every day, especially, her charming little voice and stiff gray tail when she was happy.

I’ll close with a couple other pictures Somara gave me. 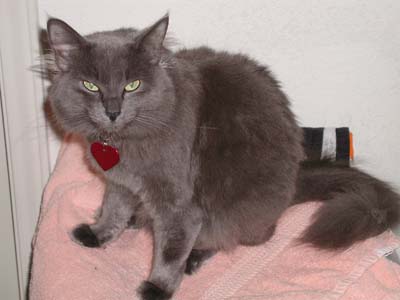 Oh, you want this towel? 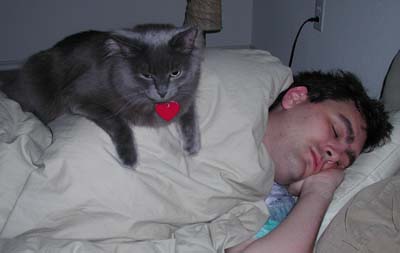