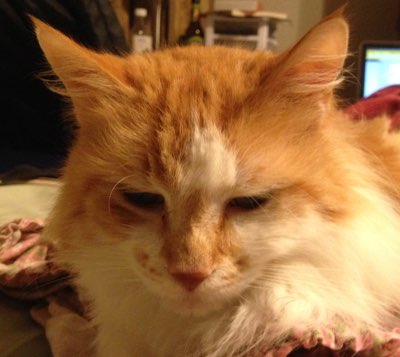 After I bought my house in late 2001 (now our house after 2008’s refinancing), we were a three-cat household and had been with the last apartment. The girls (Wicca, Molly and Miette) seemed to enjoy the greater space the house afforded them. Somara had found out in the HOA’s covenant that we could legally have four cats or some other combination of dogs by weight. We chuckled, thought, yeah, not going to happen. Wicca’s nerves were a big consideration as Molly bullied her and Miette would sometimes torment her by wanting to play or eat her food. 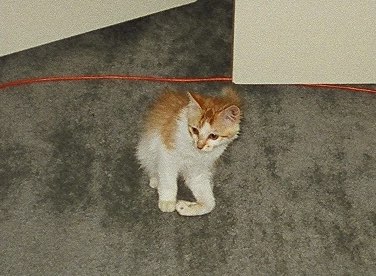 His first steps into the living room after being quarantined from the girls in Somara’s office for a few days.

Nemo’s introduction to our family was the most tragic and fortunate at the same time. It happened one day in July 2002, Somara was running a work-related errand up in Georgetown. While driving along, she witnessed a vehicle run over what appeared to be a plastic bag rolling away into a ditch. Then it quickly dawned on her, this was no bag but a kitten! Somara quickly pulled a U-turn to go rescue the poor creature. There he was, lying on the ground…possibly dead. She picked him up, realized he was just paralyzed via shock. Then he “thawed out” and reactively bit Somara on the knuckle! Their relationship was off to a great beginning!

As for what had just happened, Nemo was very lucky. The car only ran over his front left leg, mangling it permanently into what you will continuously see in all his photos. We labelled this his lucky paw/leg because the majority of cats are less fortunate; cars tend to hit them full on, killing them instantly since they’ve get crushed or smacked by the bumper. How I tear up whenever I spot a poor dog or kitty found dead along the road, people need to be more responsible to their pets. Plus society has an obligation to these animals we’ve bred into domestication.

Classified as a feral or wild animal, Somara immediately threw him into her truck and set off to the closest veterinarian she knew. There Nemo was quarantined for a few days to make sure he didn’t have rabies. They probably treated her knuckle. This being 2002, I received an e-mail shortly at my job about the incident, cell phones were years away to being ubiquitous. My initial thoughts? Wow, what an ungrateful little bastard and how forgiving Somara was.

One of his many chill moments. The expression is funny since Nemo was often “bright eyed” and alert.

We both anxiously awaited the days needed to make sure Nemo passed the only rabies test you can give without killing the animal; see if he goes rabid in the meantime. Him being a kitten did grant him solid odds of a “no.” The other nagging concern was his leg. The initial diagnosis was amputation being inevitable. With such a tragic possibility, Somara coyly asked me if we could keep him. Without hesitation I replied yes because Nemo’s odds for adoption were going to be worse; few people want to take in a cat or dog with three legs. It was then she dubbed him Nemo (a full year before the Pixar film). I campaigned for Ashe of the Evil Dead/Army of Darkness movies, even thought about using Photoshop to put a little chainsaw on the gimpy leg.

The day came when Nemo passed and we took him home. Somara wisely kept him cooped up in her “office.” We stupidly didn’t do this when introducing Molly to Wicca; their first encounter was a chase around the apartment as soon as Molly exited the carrier and spotted Wicca. Miette and Molly mostly ignored each other; Miette quickly figured out the pecking order and joined in on bullying poor Wicca. Miette’s method was more comical, it involved a funky hop before she just pushed Wicca out of the way.

Obviously the girls knew there was a presence on the other side of the door. Nemo spent his days getting acclimated and calming down. The vet estimated he was a couple months old, not quite independent but could eat solid/wet food. Early enough to understand he was safe, no need to hiss yet he was initially shy. The latter was an attribute he had all his life with strangers; hide for an hour or two, then slink out and check out the strangers.

Integration went as well as it could. Nemo was a kitten who wanted to play. Wicca felt too old to bother and was constantly stressed out over when Molly’s next beating was coming. Molly found him a nuisance she had to occasionally smack. Miette was the most unpredictable with him. Sometimes she’d join in playing, other times she would be like Molly. One behavior Nemo quickly developed was using his lucky leg for a rope-a-dope maneuver with the ladies. Another was running semi-sideways because he couldn’t do this normally without tripping forward. 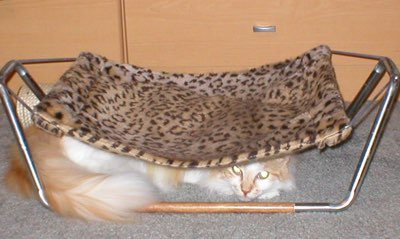 Nemo demonstrating how he doesn’t “get” the concept of sleeping/resting “on” a hammock.

After a year or so, we got our vets to agree to letting Nemo keep his leg. I think he was so accustomed to the situation he couldn’t remember his life without it being funky. Here are the other quirks he developed. 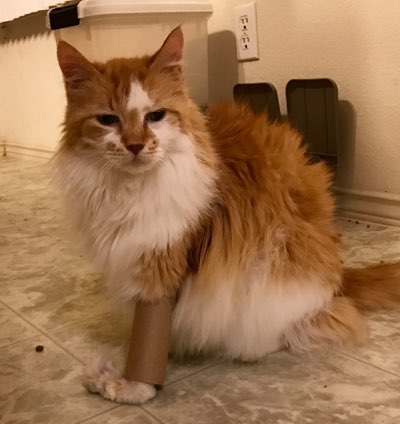 How Nemo got his crooked leg through a straight tube will always be a mystery, even to him.

Nemo will special to me for how he beat the odds constantly since Somara rescued him. He survived being run over by a car. He survived the morning Molly tried to kill him on Bloody Caturday. He was never seriously ill like Molly (bladder infection), Wicca (cancer) or Miette (brief lung leakage). The biggest milestone for him was living past 17. Most male cats live at most to be 12 on average, plus another 2-3 years if they’re neutered. He pulled it off this June 1. Nemo had lost some weight as expected in his advanced age (he would be well over 80 if human) because cats’ thyroids kick in when they get old. However, he was still full of hell and affectionate to us, especially on wanting to be near us in bed. I believe he was having trouble staying warm.

Sadly, Nemo took a turn for the worse a couple weeks after his birthday. He went into he slow and the saddening death spiral animals do before they pass away. He became distant, avoiding us, preferring to just lie on the floor in the hallway. He barely ate nor drank. Somara was in charge of what to do for he was her cat. She hesitated for days until I had to take the lead and cajole her into setting up a finale at White Rock Hospital to give him a proper goodbye, July 6. Nemo made the decision for us instead after we returned from dinner on July 3. He was in his expected resting place, his nose and eyes were caked over in snot and I think he crapped himself. His breathing was slower. Somara took to the bed to cry and I decided to give him some dignity by cleaning him up in the bathroom. I knew the end was near as he didn’t resist. Somara then chose to take him to a 24-hour vet to stop his suffering. I made the call, bundled him up to make him comfortable while Somara got herself together. Nemo knew something was going on. I will never forget how he eeked out a finally meow of resistance at me over leaving the house. It seemed like he had expended a lot of energy to say goodbye or “stop!” to me. I drove Somara’s car while she held him, telling him it was all going to be OK.

Nemo never finished the trip. He expired with a final breath in her arms by the time we were in Round Rock.

We entered the hospital to make sure, maybe his breathing had entered a “lower” state of shallow. Time in the waiting room crawled. Eventually the nurse with a brogue came in to let us know Nemo already passed when we brought him in. Then came his cremation arrangements and the somber, sad trip home.

Aftermath and his Legacy

Nemo’s urn will be coming back in a week or two. Kuroneko seems oblivious to his absence, or she doesn’t care, she usually ignored Molly and Miette. Isis would groom him on occasion and I think near his final days lying in the hallway, she would cry out to him, trying to find him. I give Isis this attribute due her past of being a mother to three litters of 11 kittens and a vet tech once said she has a motherly air about her face.

We’re going to miss our only little boy cat. Nemo was equally lovable and entertaining as he was frustrating and infuriating. He will go on to join the fund we have for other cats at White Rock Vet Hospital. If I had the money, I would make a separate one for him to assist all animals who have lost limbs.

I’ll wrap up with some photos of Nemo’s other greatest hits/moments. 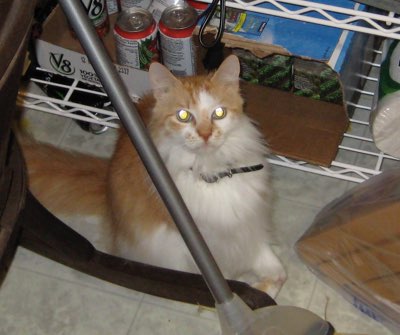 His version of “hiding” in the kitchen I think. 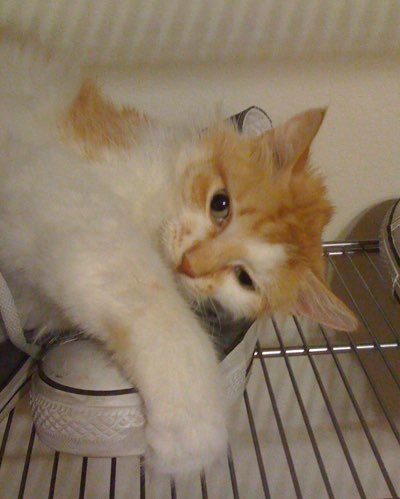 When he got up on my shoe rack to prove he could be as cute as Kuroneko doing the same. 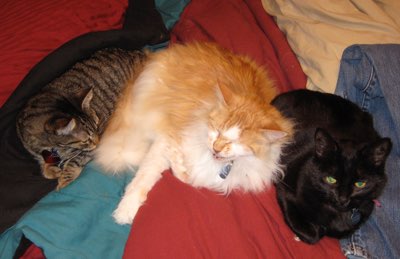