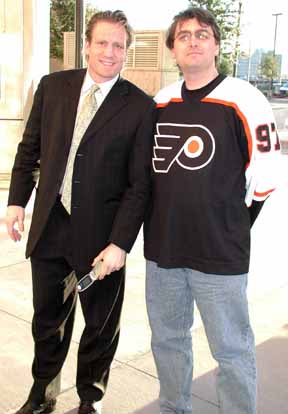 Jeremy Roenick and his No.1 Fan in Austin

Yesterday we drove all the way to Dallas to see my Flyers blow a two-goal lead and end in a tie against the Stars. On the upside, we did get our money’s worth ($10 for parking and $130 seats…each) with 65 minutes of hockey; the game lasted three periods with five minutes of overtime. I recorded the game on the DVR too, Austin isn’t blacked out.

We arrived early on purpose for several reasons: my tickets were bought online so I wanted to be prepared for problems (there were none), neither of us are familiar with Dallas’ geography thus I always “budget” time for getting lost and lastly, I wanted to get an autograph or two. The last reason seems rather ridiculous yet it isn’t when it comes to the Flyers. I follow the Philly paper online and watch their games via the NHL Center Ice package so according their local press, the players graciously do autographs because they have dedicated fans (maybe it’s in their contract too). No luck in Dallas. We found the employees’ entrance and asked if the teams come through here. They don’t, the AA Center (Arena or whatever) has a secret, below-ground entrance for the teams’ use.

Discouraged, I put my 2003-04 Flyers yearbook away in the car and when we got back to the entrance, there he was on his cell phone, Jeremy Roenick!

Quick explanation because I know the majority of you are saying, “Who is he?” Only one of the best US-born players in the League today; leads in goals for an active player (puts him in third overall for Americans as Joe Mullen and Pat LaFontaine are retired) and will be a future member of the Hall of Fame on personality alone. His several 100-plus point seasons in Chicago a decade ago will probably help his entry too. JR, his nickname, is no Wayne Gretzky or Gordie Howe but he’s loved and despised in the hockey, aka Canadian, press. Now with the brief NHL history lesson concluded, back to the awesome part!

Besides me, there was a trio of fans who drove all the way from Oklahoma to see him. We all politely asked to get our pictures with him and he put his caller on hold and obliged us. What a dude! Seeing that I was wearing his number, JR whipped out a sharpie and autographed my jersey! So cool of him! I didn’t have to ask and now we’re going to get this put away into a display for my office. This is the typical behavior NHL players exhibit from what I’ve read and it makes me like hockey more over the other sports, especially the NBA which filled with spoiled jerks.

I was so on a cloud, the Flyers could’ve lost the game and I wouldn’t have cared. Then while we were waiting to be let in, current GM, Hall of Famer and captain of the first Flyers team to win the Cup, Bobby Clarke walked by. He was smiling too; when you see him on TV, he’s always serious looking. I said good evening to him. I totally geeked out and called him Mr. Clarke. He smiled back and said thank you. I wish I weren’t paralyzed with sports-geek awe to ask for a picture. Bobby is a very polarizing figure in hockey history, especially over the Canada v. the Soviet Union series in 1972, yet I think most of his detractors would still want to meet him for an autograph or picture.

When we were let into the AA Center, I got some razzing from the Stars fans who actually knew what icing is but we were all good sports; they didn’t beat me up when I reminded them about JR being ahead of Mike Modano (the number four American) on beating Joe Mullen’s record. The seats were close enough during the game to make out the action clearly. I went up to the glass during the warm up to get a better glimpse of the Flyers. I’ve followed them on TV long enough so I wanted to see what they looked like in person. Yikes! The joke about the camera adding 10 pounds is wrong with hockey players. Most of them are giants and with their skates off, they’re giants plus three inches with skates on. TV makes them smaller. Regardless, I was within a couple feet of Mark Recchi, John LeClair, Donald Brashear, Keith Primeau, Eric Desjardins, Simon Gagne, Michal Handzus and Robert Esche. Just a bunch of names but to me, they’re my teammates on the PS2 and who I’m cheering for on TV. They have a good shot at going all the way to the Cup and they should, I put down five bucks in Vegas during the wedding saying they’d do it at 14:1 odds. Over half of them have some cool, unique contributions to the NHL’s history as well which is why I listed them. Sadly, both goals for the Flyers last night were made by recent acquisition Mike Comrie. Edmonton couldn’t afford him anymore so Philly took him because the NHL doesn’t have a salary cap, the upcoming bone of contention when the new contract will be negotiated next summer.

I’m still recovering from the late night, caffeine-fueled drive home after the game. Recovering from meeting one of my favorite hockey players will take longer and I need to keep the jersey safe until it’s in a personal display for me.

This entry was posted in Brushes with Greatness, Hockey and tagged Flyers. Bookmark the permalink.