The Converse Store returns to Austin 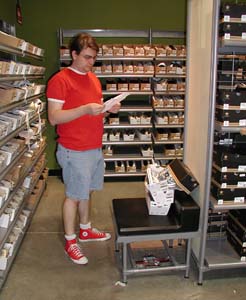 Good thing I have a coupon!

Last night I was in Chuck Taylor Paradise! The new outlet mall in Round Rock has a Converse store that is truly an outlet store (most of these so-called “outlet” malls charge just as much as the regular places). Here they have discontinued colors and styles collected from all the retailers who sent them back. Their loss is my gain because some pairs go for as little as $20. You know me, the louder the look, the better (the wife wants to photograph all my Chucks).

Years ago, there used to be an official Converse outlet store in Austin up around the northwest next to the Borders at Great Hills and 183. Sadly, Converse went down for the count a few years ago and the store closed by 2000. Then Nike bought them, revamped their lines, outsourced the labor the to China and jacked the price $10. I have to concede that it’s better to have them around than not at all. I suppose it balances out the T-shirts I buy from American Apparel and jeans from Lucky (both great US-made brands). Part of the Nike-induced comeback has been Chucks being more widely available through Journeys, Pac-Sun, Hot Topic, Jarman and other trendy mall retailers. The prices and selection have been a crapshoot although I have to say that the people with Journeys at Lakeline and Barton Creek are always good to me. But Chucks are a small segment of their business and I don’t think they’re as lucrative as an overpriced pair of Air Jordans. This store may be a subsection of the Nike building yet it’s nothing but Converse with the majority of it dedicated to Chucks (low and high tops).

With my 20+ pairs (I will be doing an audit again to check how many I do have), you know I’m going to be tormenting the poor staff up there. I made sure they took my phone number to alert me to anything unusual. I’m already on the list for the next shipment this week because I really want a pair in UT’s colors; they call it burnt orange here, Converse classifies it as Burnt Sienna. I am not a UT patriot but I do need a pair to match my Longhorns hockey jersey. Now I will have to resist the lure of driving up to that mall every Monday morning to see what’s available and probably talk a retailer into parting with another Converse display because the one I own only holds 21 pairs. 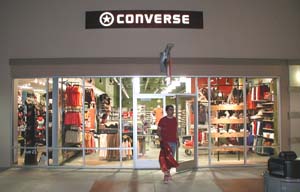 The staff gets a break until next month.

This entry was posted in Factoids. Bookmark the permalink.