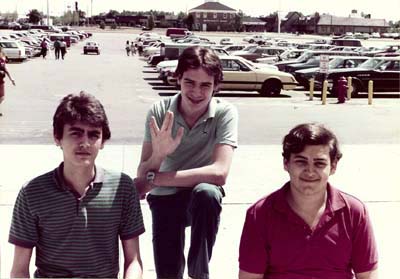 Obviously, I'm the dork on the left. To my right would be the friends I had then: Andy (m) and Mark (r), classmates I met at Lawrence Central HS.

Contrary to America’s popular culture, I never expected my 16th birthday to be some huge magical, life-changing event nor did I anticipate a major bash one only sees in movies. Heck, I was shocked my parents would let me invite a couple friends to celebrate at the nearby Farrell’s, a now extinct restaurant-ice cream chain few even remember.

So far the Summer of 1984 sucked. My family had moved to Indianoplace around March, leaving Houston right when the weather was warming out was an unpleasant experience too. Then I was on “Spring Break” for three weeks until all the housing arrangements were finalized. I finished the last six weeks of the school year at Lawrence Central thanks to busing; Lawrence North was closer yet gangbangers from the inner city had to be sent there to maintain the region’s ethnic tensions. However, I didn’t feel much resentment for it other than North having newer facilities and it beat being enrolled in a Catholic prison like my brother insisted on attending. Still, I managed. Being the “new kid” became routine for me and I quickly made friends with the guys in the photograph; geeks and nerds have little difficulty finding each other.

School ended around late May and I spent the first half of Summer bored out of my mind. Not old enough to drive nor work, I was stranded at the house, broke, alone and obviously (being a teenager) miserable. This wasn’t radically different from the Summer of 1983 but there I could at least walk to the nearby pool to get some exercise. There were bright spots: getting to see the new Indiana Jones and Star Trek movies with the friends in the photograph; yet it wasn’t much. I’m sure the neighborhood we lived in had a few people close to my age, I just can’t recall why nothing gelled to pass the Summer.

When my birthday arrived, things improved a tad. I could finally be a minimum-wage slave! Those days it was a pathetic $3.35/hour which didn’t buy a whole lot thanks to St. Reagan keeping it low since 1981. I didn’t care too much though. What I saw was having my own money to save, spend and earn. My parents would no longer be dangling those financial carrots in front of me to push me around as much. They weren’t very thrilled over my disinterest in driver’s education too; Mark already drove, why did I need a car? Anyway, my first gig was being a busboy/dishwasher at the same Farrell’s we celebrated at. The job seemed like fun in the beginning, namely the obnoxious birthday antics they did. I learned pretty quickly how the ceremonial stuff grew old and Farrell’s was just another restaurant. I also didn’t completely absorb this lesson regarding food service drudgery for another several years thanks to the eventual move to North Dakota where any work for teenagers was scarce. Regardless of the mess, smell, jerk co-workers and uncivil customers, the paycheck I put away in my savings account every two weeks salvaged a rather lousy Summer.

This entry was posted in History. Bookmark the permalink.