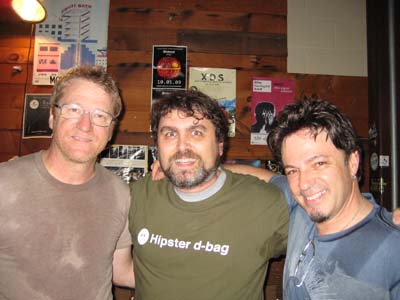 David and Johnny flanking me after an awesome show

Last Thursday, Cracker came to Austin to promote their ninth studio album and wrap up their current North American tour (once again, we’re at the end or the beginning). I had seen them before in 2002 at La Zona Rosa but this time they performed at the better, more intimate Mohawk on Red River. Both shows were great yet Mohawk is much better due to the proximity one can get to the stage which isn’t impossible to do at this venue. My co-worker Maud tagged along because my original concert conspirator (Kate) became ill. Fear not, we’ll have another opportunity. I think Mark (my regular concert buddy) wasn’t interested or was too busy, I’ll go with the latter. Anyway, Cracker became Maud’s first true experience of a live concert in Austin. Firstly, she’s from France and her country lacks the same scene America and the UK have, especially at the level we spoiled Austinites have so this was a relatively new activity for her. Maud has been to three shows yet they weren’t like this, especially when one was Bruce Springsteen (arena rock blows!). Secondly, I don’t think she has ever been right on the stage which is key to making a great memory. Lastly, you can’t say you’re a vet until you’ve dealt with your first drunken, dumbass pushing and shoving you, trying to take your spot or something. I wish I could’ve spared her that element but it’s a part of rock n’ roll. David Lowery took the moron’s antics in stride by saying, “Hey it’s all fun and dancing until someone breaks a hip.” Johnny made a security request when David’s ribbing didn’t make its point. Fortunately, several audience members resolved it by pushing the idiot toward the door and bouncers. 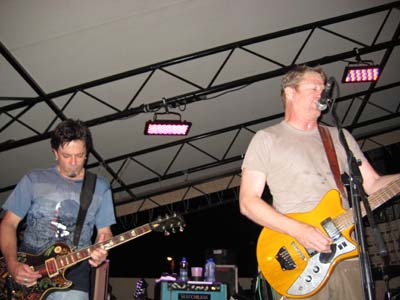 Cracker doing their thing on stage!

Unpleasantness aside, Cracker lived up to the potential they’ve always had since their debut in 1992 and it was 98 percent of the evening. Johnny Hickman is an incredible guitarist which explains why these guys were on the Led Zeppelin tribute in 1995. They mainly focused on tracks from Sunrise in the Land of Milk and Honey while sprinkling in their past hits everyone loves: “Teen Angst,” “Mr. Wrong,” “Lonesome Johnny Blues,” “Gimme One More Chance,” “Eurotrash Girl,” and of course “Low.” I was thrilled they still do “Shake Some Action” which I’ve only found on the Clueless soundtrack and “Pictures of Matchstick Men” (an old Status Quo tune) from David’s CVB days. The crowd was into everything which was good. Last month, when I saw John Cougar, that audience only wanted him to play the oldies, very sad. Then again, I was closer to the median age with the attendees. Either the general public doesn’t know there’s a new Cracker record or it being a school night was a problem. I’d go with a little of both courtesy of Austin’s backward radio stations.

After the show, I got to speak to the duo briefly. I always wanted to thank David again for the interview he granted me in 1988 while I was with WMUR. He didn’t remember it thankfully. That was fine with me, I was terrible! Maud thought Johnny was amazing, namely for his happy demeanor.

As for the current album. Is it good? It is excellent. David hasn’t lost his edge to write strong, powerful rockers peppered with his trademark wise-ass lyrics. Johnny contributes a catchy duet about friendship referencing Captain Beefheart at the bridge. If that isn’t enough, there are guest appearances from John Doe (X), Patterson Hood (Drive By Truckers) and Adam Duritz (Counting Crows).

I’ll close with an old joke David told in Spin magazine after CVB toured with REM as their opener, I wish I had the time ask him if he remembered it but it was late, we needed to get home.

How many members of REM does it take to change a light bulb?

Two. One to do it and one to put on a Robyn Hitchcock album.

This entry was posted in Brushes with Greatness, Music. Bookmark the permalink.

One Response to Cracker