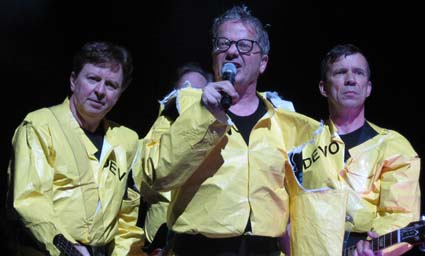 Last Sunday’s concert was almost 30 years in the making for me. When Devo hit my radar with their third album Freedom of Choice, I was 12 and these guys were just plain weird. Some of the goofy things Mark Mothersbaugh said on The Mike Douglas Show didn’t help…never mind why they were on a talk show my grandmother watched religiously. I gradually became a fan through the odd videos Devo distributed through late-night television (things subbing for SNL), HBO, Solid Gold and this new network starting up on cable called MTV. It was cool to see these guys having more going for them than “Whip It.”

There must’ve been something to their material which gave them a wide appeal. I remember how puzzled my brother and I were when Mom bought the live EP. Brian eventually confiscated this; too many reasons why when you’re an embarrassed teenager. Recently Rhino repackaged the entire show that the EP was derived from. It was originally distributed to radio stations to play on King Biscuit Flower Hour and the vinyl had Bugs Bunny on the label. I scored a copy since only 5000 were pressed.

Anyway, Devo must’ve sensed my grumblings last year and returned to Austin to grace us with their talents again: SXSW, ACL Fest and Fun Fun Fest don’t count as legitimate stops in my opinion. I remember how stoked I was to score the tickets online. It helped me overcome the horrendous weather Central Texas was experiencing in early February.

This show was also our first at the new Moody Theater. It serves as a downtown venue for concerts people pay to attend and it’s now the current home to tape new episodes of Austin City Limits. Since we only got to see one taping, I can’t say if it’s better or worse than the old UT Communications building. As for competing locations: Stubb’s, Austin Music Hall, Antone’s and Mohawk; it’s alright yet they have the pricing backwards. 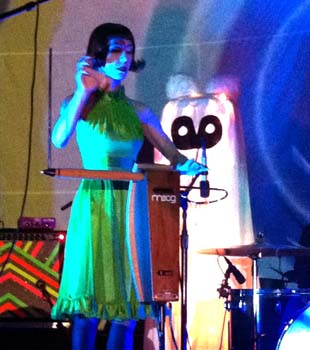 That's Yvonne, a real person, not a mannequin.

Opening the show was Austin’s very own The Octopus Project. I have their current album, it’s great so I was looking forward to seeing them. While watching them I kept thinking of Combustible Edison despite their music not being as loud. 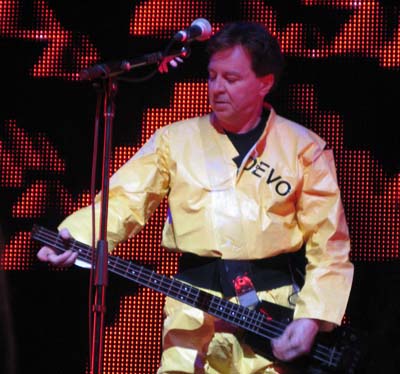 Before Devo took the stage, their giant LED display showed snippets from their vast catalog of videos. Such great memories. In many ways, these guys were trailblazers since this has become rather standard fare. 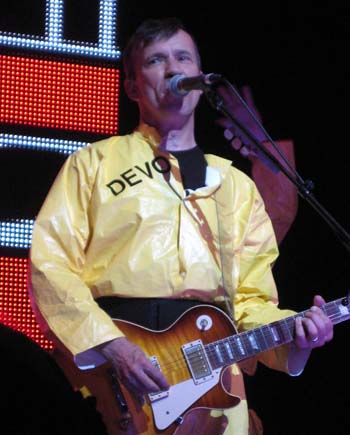 The set began with a track off the current album, which I think is great. Some diehards have been critical. Then again, I enjoyed their brief stint on Enigma Records. Someone posted the entire evening here, thank you again setlist.fm. They sprinkled in the older stuff in between new songs before they just stuck with the hits. 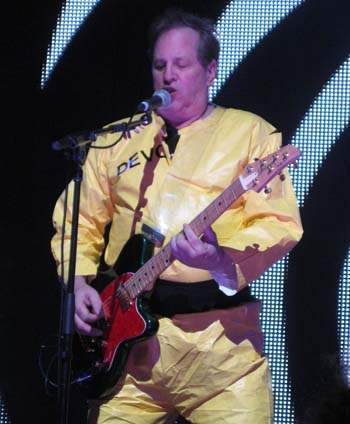 Devo didn’t disappoint, especially when they did their infamous synchronized jumping around to “Uncontrollable Urge” which I think many people know from their appearance in Urgh!!! A Music War. There were at least four costume changes: the new jumpsuits, the trademark helmets (now blue), the yellow jumpsuits from the Seventies (I didn’t know these were made of paper) and these hot dog shirts which could be mistaken for Hawaiian prints if you don’t look carefully. 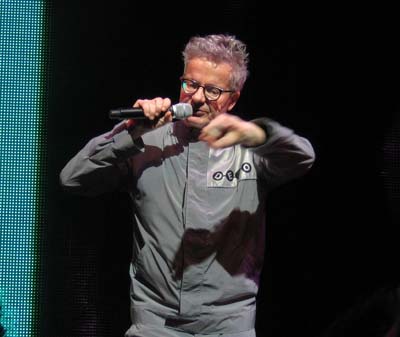 While piecing together the essentials on this post, I stumbled upon this person’s blog demonstrating the band’s wicked sense of humor during “Jocko Homo,” primarily Mark throwing bananas at the crowd. I thought he was mooning us until he started pulling the fruit out of his drawers. 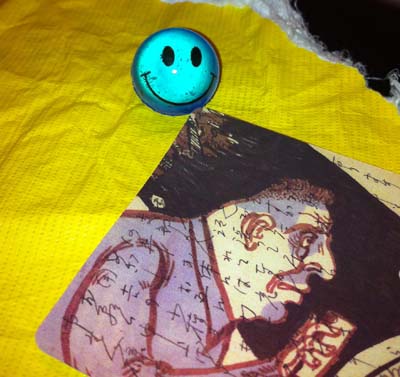 Items Mark threw into the crowd to put in our concert scrapbook: a piece of a jumpsuit, a smiling rubber ball and a card in Spanish.

Many people often overlook the origin of the band’s name and philosophy, hell I remember Casey Kasem being way off the mark during a countdown. Devo is short for De-Evolution. Unlike Casey’s erroneous small talk, founders Mark and Jerry don’t believe we’re turning back into primates. They feel civilization is breaking down with the numerous stupid things the human race has been doing through the 20th and 21st century, namely our conformity and violence. Some drunk idiots brought the point home as they tried to shove past us. How I wished the concert were at Stubb’s instead, the security there would’ve kicked those assholes out without hesitation. The Moody Theater staff was a joke so we had to get tough on a few.

Editorial aside, everybody had a great time and now Devo is another legendary band I can check off my list. I may not have had the opportunity to see them at their pinnacle, something I envy Mark for but I wasn’t old enough in 1982 to see them in Houston. 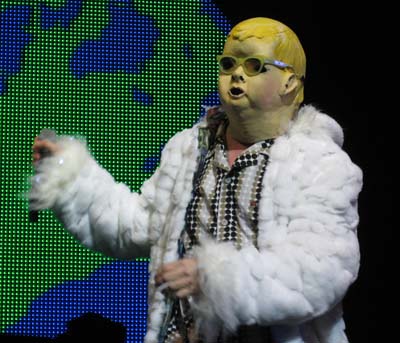 Mark as Booji Boy closing the evening with "Beautiful World"

This entry was posted in Music. Bookmark the permalink.