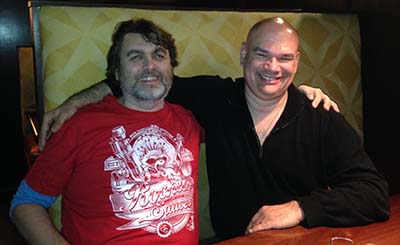 Nelson! College buddy number two finally sees me in my adopted home! Hoser was number one way back in 1997. Doc doesn’t count because he lived/more here before I did, so that negates his past visits.

What was the occasion? Some industry/business thing for Nelson’s employer. Banking types have descended upon downtown through the week to carouse, discuss, recruit, show off and enjoy a free Lyle Lovett concert. Can’t remember who is the guest speaker. In the past Nelson said they’ve had people I don’t think were the right choices since they’ve never been successful…primarily George Dubious Bush, he ran two companies and a struggling democracy into the toilet.

Hell, Nelson can visit me if were Ayn Rand’s birthday and I wouldn’t care. It was a fantastic, although brief, visit. He landed early Tuesday afternoon, I picked him up at the Howard Lane train stop; his hotel was across the street from the train’s downtown starting point. I gave him a quick tour of our (ware)house, showed him my Chucks collection, introduced the cats who were willing to stick around (Kuroneko, Miette) and then we went to dinner at some place very Austin…Chuy’s. It was TexMex or barbecue, those are Austin things. Obviously Somara was with us by then. The Derrs (Jeremy, Kristin, Kristin’s mom whose name escapes me and Ben) met us there. I wanted Nelson and Jeremy to meet. Nelson needed to know who’s been putting up with me for 15 years and I wanted to prove to Jeremy that Nelson wasn’t imaginary.

After dinner, the Derrs said goodnight, I dropped off Somara and us two Marquette alumni (rare here) went to his hotel’s bar to have drinks, catch up on other things. We normally catch up every month over the phone…yes, we still use ours to talk; but there’s something to being in person.

Nelson is here until Friday afternoon. Due to the convention’s nature, Tuesday evening was the only opportunity we both had. I’m grateful it happened. Next up. Getting one of the older children a chance to hang out with Aunt Somara and Uncle Steve in Austin. Better yet, a return trip for Nelson without the hastle of work!

This entry was posted in Austintatious, News and tagged Marquette Friend. Bookmark the permalink.