Kingsman: The Golden Circle: Worth Seeing 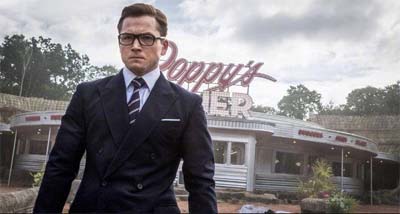 The surprise hit from a couple years ago returns and the people running things did it well. Circle is a sequel that dodged the pitfalls many run into:

To address bullet-point number two, and this isn’t a spoiler, the threat is a villain named Poppy who controls much of the illegal drug trade (pot, heroin, coke, etc.). Poppy has only one simple demand of the world’s leaders, make her business legal because she wants to live in the open, not in her secret base.

Step one in Poppy’s plan is to destroy the Kingsmen which is pretty obvious in the trailer. Now Eggsy and Merlin seek help from the American version of their organization, the Statesmen. From there they discover that Harry is still alive via a stretched explanation but they all team up to take down Poppy for good.

Circle is as good as the original, following in the foot steps of the goofy, exaggerated spy films made in the Sixties cashing in on James Bond and The Man from UNCLE. It’s filled with numerous fights using 360° pans and slow-motion sequences a la The Matrix, impossible gadgets, a callback to Harry’s infamous ass-kicking method, sly jokes and a demonstration of Elton John’s acting ability.

If you enjoyed The Kingsman, you will be thrilled to see Circle, it lived up to the hype. Never seen either and/or you dig Austin Powers, watch the first one and then get to Cricle at your nearby theater.

Alamo Extras:  Cartoon of bugs having a picnic; super-long beer commercial, another for John Collier clothes and lastly spy toys from the Sixties; cowboys singing “I Saw The Light”; Trailer for Spy in Your Eye, For Your Height Only and The Man on the Spying Trapeze; UK Newsreel showing an American rodeo; parkour sequences inspired by The Kingman; and lastly, the hilarious meeting of Archer and Eggsy.

This entry was posted in In Theaters, Movies and tagged Dark Comedy, Spy-Fi. Bookmark the permalink.