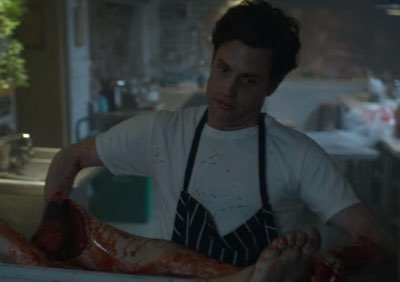 In light of Pandemic Theater, I chose to add to the other element involved with getting through the boredom but let’s face it, binge watching was something we were already doing years ago. Netflix and other streaming services didn’t invent it though, they just exacerbated it, made it more noticeable through the convenience factor. No, binge watching existed years earlier:

So I made a logo to feature shows I’ve recently blown through, I may apply it to some in the past as I also made a subcategory for TV…or I may just stick with it only from now on.

Initiating Bingewatch is something I got pulled into by an ex-girlfriend who was an addict of all those Lifetime flicks the cable channel does yet I think they’re more focused than the Hallmark Channel‘s weird fare.

You is something Netflix poached from Lifetime and is based upon a book, hence the author is involved. I was willing to give it a chance because I saw Greg Berlanti’s involvement. You may recognize his name, he’s DC Comics’ version of Joss Whedon, bringing the superhero line success on “the small screen” given how inconsistent the property is with theaters.

The story is about the obsessions and misadventures of Joe Goldberg. Book store manager officially, creepy stalker in reality. I find You to be a cautionary tale about how easily our personal information is accessible as shown in the first episode when Guinevere Beck enters his store to buy something. Besides being smitten in an unhealthy way, Joe begins the process of being “Johnny on the Spot,” and eliminating romantic rivals. What makes the show interesting, sometimes funny, is how not everything goes to plan, Joe isn’t Dexter or Patrick Bateman (American Psycho). Being Netflix, You can show things only HBO/Showtime would dare so be ready to squirm a few times.

That’s all I can write. Anything further would give it away, especially how the producers managed to create a second season due to the first being rather self contained. I would just argue towards giving You a try, it breaks out of the restrictions Lifetime would put on the execution due to their standards and practices. It also managed to keep me guessing which is hard to do with most experienced, media savvy audiences.

This entry was posted in Bingewatch, TV and tagged Netflix, RomCom, Thriller. Bookmark the permalink.