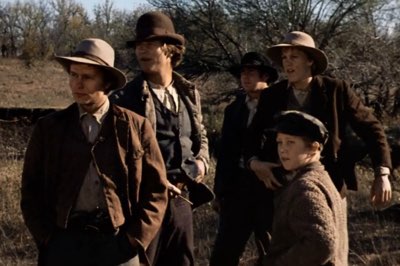 Besides being the first movie to use the title Bad Company (the name reappeared in 1995 and 2002, both as modern Action flicks), we can also blame the 1972 period piece for giving the AOR band its name; Paul Rodgers loved the movie. Makes since if you ever listen to the lyrics to Bad Company’s self-named tune.

As for the movie, it was a grittier or more realistic interpretation of what life was like on the American Prairie (Kansas, Nebraska) during the Civil War. The focus is on Drew, a young man from Ohio fleeing military conscription around 1863. His parents don’t want him in the US Army because his older brother died at Chickamauga and they lack the $300 to spare him. So Drew’s father gives him $100 and orders him to flee West, join a wagon train in St. Joseph, MO which will then take him to Nevada to seek his fortune in silver mining.

Drew makes it to St. Joseph without incident but he meets Jake, a young man around his age, who convinces him to join up with his little group of fellow conscription dodgers. Why not the wagon train? Jake claims the waiting list is six months long to get a spot. Before he can verify this, soldiers stationed in the area grow suspicious and it’s likely they will arrest him. So Drew throws his lot in with Jake’s gang to head West.

From there you can see it isn’t days of wine and roses. The weather is terrible for they leave in the late Fall. There are other people roaming the land with guns, out to steal their provisions and money. There are people willing to trade services for money, as in the world’s oldest profession. There are farmers who shoot first, ask questions later. The list of hazards goes on. All through it Drew tries to maintain being the person he was raised to be, a god-fearing, law-abiding Christian despite the others not inhibited by such a moral compass. Huckleberry Finn is a luxury cruise compared to what Drew, Jake and their gang endure in Bad Company.

It’s currently streaming on Hulu if you’re interested in seeing an anti-Western yet I wouldn’t put in that genre. Westerns clearly take place after the Civil War and tend to be set between the mid 1870s to the 1900s. Bad Company is a must for Jeff Bridges’ fans for he plays Jake. He just oozes the charisma of someone who has been shifty all his life and used this talent to escape the Army…if his story checks out. Big Lebowski fans will get a kick out of seeing a minor character/actor/role they’ll instantly recognize too.