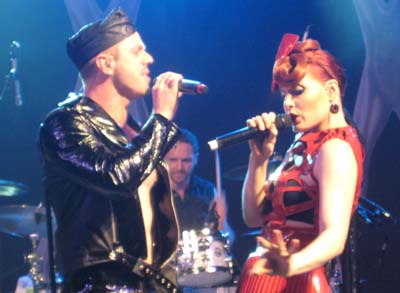 When it comes to this band, it was about damned time they returned to Austin. Years ago they got a big push through SXSW and it probably helped them stand above the flood of New York acts (Strokes, Interpol) reviving the Eighties sound. I was a tad bummed to find out they were recently opening for Lady Flavor-of-the-Month (should be the other way around due to her limited body of work) because I wasn’t going to refinance my house to catch a 40-minute set. Hopefully they have a smart management team that knew they could successfully be the headliner in particular cities, namely ones which aren’t dominated by homophobes.

Scissor Sisters lived up to my expectations in concert. The show was part Mardi Gras, part Cabaret, part dance club and part Spring Break/Fire Island (some young guys took off their shirts; yeah, I need to work out more) wrapped in an aerobic workout. They covered the hits from all three albums with an emphasis on the current release Night Work which is a slight departure from their past material. The slow stuff I like such as “It Can’t Come Quickly Enough” or “Tell You Tonight” were skipped but I could handle it since they pulled off “Take Your Mama” live. I think they sprinkle in Ana’s lead-vocal songs to give Jake some rest, falsettos can be pretty grueling. I mention this due to someone saying Ana was rather flat and/or disappointing from a past performance. Maybe she had an off-night then, during this Austin appearance, Ana was spot on especially during “Kiss You Off.” 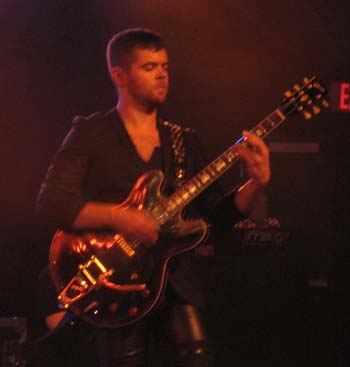 Other great touches from last evening…The opening act was a DJ who did some pretty cool remixes of La Roux and Depeche Mode. He definitely got the crowd going. It would’ve been nice to see a new band in a similar vein but with Austin having a hard 1030 PM curfew on a Sunday evening, keeping the primary act on schedule is wiser. I also discovered my psychic connection to Ana in the middle of the set. Before she sang something I have totally spaced on, Ana requested everybody to put away all the cameras and phones. Just be in the moment for one song. She was serious, especially when she threatened to have someone’s camera put in Jake’s butt. There was complete compliance as far as I could tell being in the thick of the crowd; I was within the first 10 rows. Personally, it would be nice to have the audience under the same rule as the professional photographers, they’re only allowed to take pictures during the first three numbers. Then they have to vacate the barricaded spot the venue has set up. I learned this from my brief time with Stardate when I overheard the production manager Dan give the ground rules to the media for the B-52s. At Devo last week, I was glad to see this continue…when song number three ended, they cleared out. If everybody else did, we could all enjoy the concert more. Nothing is more annoying than some schmuck holding up a phone/camera throughout your favorite tune trying to record it in its entirety and his hand/device obstructs the view.

Back to the band, less editorial!

For the encore, Jake and Ana changed outfits (Jake was on his third here) and did an acoustic version of “Sex and Violence” before finally giving the crowd what it really wanted, their 2006 hit “I Don’t Feel Like Dancin’.”

Currently, the site I like to use for getting the set list has turned up snake eyes. I’m confident something will come through yet I should’ve politely asked one recipient nicely if I could’ve taken a photo of hers. I owe this Web site and I really wanted to score a real copy to give to a fellow fan who also shares my love for Roxy Music, another major influence on Scissor Sisters.

Do I recommend seeing Scissor Sisters live? Without hesitation since my closest friends and fellow music fans aren’t the types whose heads would explode like Michele Bachmann’s at the site of, you know, openly gay people. Now those who are Pink Floyd purists, they may have to be kept away with a restraining order.

This entry was posted in Music. Bookmark the permalink.