The 2013 Malaise may be (mostly) defeated

If so, it only took Modern Western Science about a year to get it right. I don’t really blame nor bear any ill will toward the doctors/PAs involved. They were all trying their best based upon the clues my body gave via blood, via testing and how well I could describe the symptoms. I admit to getting frustrated since not being closer to 100 percent well (some weeks, getting to 85 was a struggle) messed with my goals, plans and got me lectures from my immediate supervisor; good thing I didn’t contract cancer is all I have left to say regarding the latter.

Over a week ago I was stoked about the Apple-based doctor getting me a prescription for sulfameth to attack a rather impairing sinus infection. Finally, the doctors are giving me something effective instead of crap bordering on homeopathic remedies. First dose on Friday night, nothing. Next two on Saturday, I was feeling fair until late afternoon but figured I had a long day that had me in high gear shortly after I got out of bed, the same lecturing boss requested me to come in to mentor a new person for a couple hours. I wouldn’t call it volunteering based upon his tone. Watching the Stars game bordered on being a chore as I felt like I was backsliding or contracting a relapse of the flu/a cold. Another two on Sunday, took it easy and caught The Great Gatsby (fifth attempt), skipped doing anything else bordering on strenuous yet fatigue was coming on. Monday was agonizing, still I kept taking the sulfa (as doctors call it because the drug belongs to a family of medications under this prefix) figuring recuperation was around the corner once the sinus issue was eliminated. No dice. I had now acquired joint pains (the knees, throughout both feet, my left hand and right index finger); my running routine was a weak suspect; chills/sweating, slight fever; plus the cherry on top…concentration issues. The workday couldn’t end any faster as I ate dinner and collapsed early. Tuesday morning was a bust along with the next few days.

I was stumped, pissed and worried. Only when I wasn’t fighting off 101-102°F/38-38.5°C fever bouts, the sweats followed by the chills and wondering if gremlins kept smacking my sore joints during the little sleep I received. These continued to feed the flu/cold relapse theory until Somara noticed how bright red my skin was. How right she was, I resembled Dejah Thoris and realized I had been scratching my limbs more frequently. Penicillin gave me a similar rash in 1996 so I asked Somara to use her Google Fu, find out if this sulfameth had worse side effects than I was warned about. Didn’t take long since it has a whopper of a list: 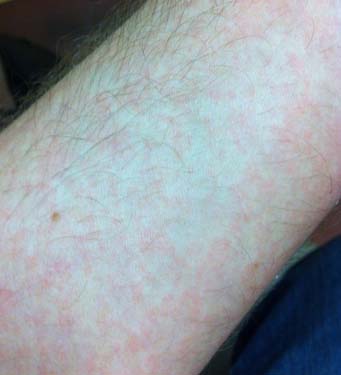 I can play connect the dots on my inner arm

My outer arm is no slouch on the rash action. It’s like the Milky Way in red.

Quite a list this sulfameth has. As we went over it before seeing a doctor at Austin Regional Clinic (ARC) due to the Apple one being booked solid, I wondered, “Why is sulfameth used again? Thirty-one possible, ugly side effects requiring a physician visit and I had a third of them!” I was relieved to discover I wasn’t a freak after a friend told me his ex-wife had similar issues with this drug.

The ARC doctor got a good look at me, examined my skin up close and she was pretty convinced sulfameth screwed me just from the rash alone. Still took my blood (three vials) to make sure, no word on the results.

Currently, the remedy is prednisone to kill the rash. It’s a steroid to jump start the process. The remaining symptoms? Joint pain started to recede when I stopped taking the sulfa. I had one more fever/chill struggle Friday evening, my temperature has been under 99°F/37.5°C afterwards. Lymph nodes don’t smart nor bulge as much. Here was the downside…prednisone must be taken in the morning, otherwise it keeps you awake all night. I had to fight the itching Friday night/Saturday morning. Waiting sucked but the results paid off, the rash retreated significantly in 12-plus hours.

What about the ongoing issue I’ve for months, coughing? It has declined! Ditto with the super-annoying drainage.

I won’t break out the champagne anytime soon. Not until I have a week without all the crap I’ve endured as per 2013 Malaise. I do feel some minor vindication. All along I just wanted the doctors to give me something to boost my immune system. In 1999, it collapsed to the point of an HIV discussion being necessary; my white-blood cell count was a three, it should be four when well, way higher if you’re sick. All the other drugs thrown at this situation have failed miserably (too many to list) and it took a horrible allergic reaction to put everything back on track. At least the sinus infection is cured.

This entry was posted in News. Bookmark the permalink.