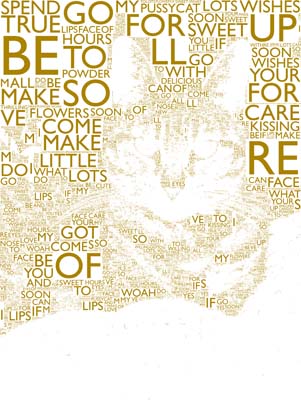 This was done with a relatively cheap (in a good way) piece of software called Wordify from the App Store.

It’s pretty simple to operate. You take a picture, decide which words you want used (I haven’t found an upper limit yet), pick the color via RGB sliders and select the font (size and style). Then watch it compile the photo out of the words. When it’s finished, the final artwork is opened in Preview as a PDF.

For my first official Wordify Portrait, I took a favorite photo of Molly, picked a color closest to her fur and inserted the lyrics to Tom Jones’ “What’s New Pussycat?” There was some trial and error until I got the desired result.

This entry was posted in Cats. Bookmark the permalink.