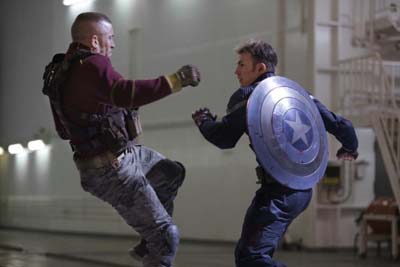 Marvel has taken the title away from Pixar for the kick-ass movie streak. Let me put in a quick qualifier. Only Marvel characters tied to The Avengers since the rebooted Spider-Man, the very dreadful Fantastic Four and uneven X-Men movies are outside this arrangement. Pixar’s run was 11 (from Toy Story to Toy Story 3, it ended with Cars 2 while Cars received a passing grade until the cynical, crappy 2 appeared), Marvel-Avengers is currently at nine (although Iron Man 2 and Thor were sluggish, they’ve corrected this gripe by 3 and The Dark World). I’m confident they will hit 10 since everyone is stoked about The Avengers 2, yet I don’t know what will follow. Guardians of the Galaxy shouldn’t count unless they find a way to tie this into the Avengers.

As for Winter, the new directors capitalized on current events with the NSA and our government’s over dependence on drones. There’s a touch of Minority Report in SHIELD’s twisted logic too. The Cap, being someone who embodies and lives by the ideals the current cretins in Washington pay lip service to, gets caught up in a plot reminiscent of those paranoid Seventies thrillers (The Parallax View, Three Days of the Condor) in which he cannot trust anyone, including Col. Fury. All the anachronism gags are kept to a minimum instead of being a crutch. I do admit, Captain America being a remnant of WWII works much better today than when he was reintroduced to Marvel Comics in the early Sixties.

The action is fast paced. The plot is credible and amusing, its title is a red herring in my opinion. I could’ve done without the excessive product placements, including Cap and Black Widow hanging out in an Apple Store to research something as they’re politely asked by a retail employee if they need help. It helps to have seen the first movie due to some callbacks to those events. The cameos were wonderful nods to the fans: Stan Lee as always, Gary Shandling’s pesky senator makes an appearance, Jenny Agutter of Logan’s Run fame is one you must pay attention to. Robert Redford’s major role was clever because he starred in several of the Seventies flicks I mentioned involving conspiracies (All The President’s Men anyone?). I loved how Cap’s Seventies sidekick The Falcon was integrated. He can’t speak to birds but at least his ability to fly was credible. Superfans will recognize the terrorist leader from the first act. Anyone who posts a comment explaining the villain gets a little prize. The major rule, I have to actually know you.

A round of applause to the team(s) involved. I loved Captain America as a little boy. When I grew older, I found him to be more relevant as an Avenger, he was never interesting enough to carry his comic book. It wasn’t the character, I think it was the various Marvel writers/artists’ execution.

Alamo Extras: Other Late Sixties Marvel cartoons by Ralph Baskshi, Tom Hiddleston doing his Chris Evans imitation, an outtake from the last Thor movie, scenes from the terrible late Seventies-early Eighties live-action adaptation of Captain America I used to watch on CBS and a news story involving ex-soldiers dressed as Batman and Captain America rescuing a cat from a house fire. We got there a tad late.

This entry was posted in In Theaters, Movies and tagged Superheroes. Bookmark the permalink.