Lost in Space is finally returning… 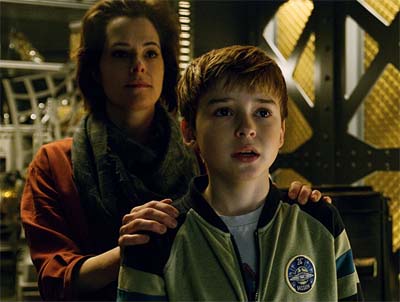 …and this time Netflix is going to do it correctly and/or better! Indie Poster Child Parker Posey as Dr. Smith. Best casting decision since Gary Oldman.

The new series will have all 10 episodes available on April 13 this year! Given the streaming service’s success-to-failure ratio with their own productions, I have a strong feeling the Robinson family’s saga is finally going to be done well. Personally, after Battlestar Galactica (2009) limped across the finish line, a good Space Opera with decent Science credentials has been wanted. The Orville doesn’t cut it. Star Trek: Discovery is CBS trying to make a streaming business that will fail in the long run, I’m not spending my money to subsidize reruns of Murder She Wrote/NCIS/procedurals for aging Boomers who can’t figure out “how this crap works?” I have no opinion on Altered Carbon or the comedy Futureman. Westworld and The Handmaiden’s Tale are more philosophical than actual Science Fiction. Did I miss anything? Drop me a comment, I’m willing to admit my oversights.

I recently discovered the original Sixties version existing on Hulu. The show’s original pilot is present too, it was a chore to watch alongside the astronomical inaccuracies…an “uncharted” meteor storm is what threw the Gemini 12 of course? Besides, the ship’s name being different, Dr. Smith and the robot weren’t part of the crew and Major West was Dr. West, I think he was the astronomer who specialized in what’s at Alpha Centauri. What else, the voyage was going to be a century, not five-to-six years and the mission was internationally backed. The aired pilot aptly named “The Reluctant Stowaway” had all the elements we know so it was like a reboot unlike Star Trek just going with the sixth episode Desilu had in the can. Even when Jonathan Harris plays Dr. Smith “normally,” he’s still hamming it up a bit. I might stick to the first season until the show shifted to campy. I had seen in it syndication as a kid and I could tell Lost was a rather dumb show compared to Star Trek, Battlestar Galactica and Space: 1999.

As for the 1998 film with the A-list cast: William Hurt, Mimi Rogers, Lacy Chabert, Heather Graham (hubba hubba, she has remained gorgeous), Matthew LeBlanc, Lennie James (Walking Dead), the robot being designed by the Henson Creature Shop and the incredible Gary Oldman as Dr. Smith…it hasn’t aged well. Neither the CG-driven effects or the stilted script from the craptacular Akiva Goldsman (Batman Forever amongst his collection of dreck) just highlight how flawed it was. Despite middling profitability, Lost in Space 2 & 3 weren’t going to happen so the actors were paid a kill fee. I am going to watch it again soon because it is available on Netflix plus I want to write a new review alongside the short blurb I gave it 20 years ago when Picayune was a magazine and clumsy Web site (remember when frames were a thing?).

There was another attempt in the Aughts I recalled (Wikipedia says 2004). The WB network wanted to take a crack at the story. This had potential as well, the John Woo directed the pilot and a less-famous Andrea Palicki (now Commander Grayson on The Orville) as Judy. The network chose to pass. Good thing WB did. This attempt jettisoned many key elements to the original premise: an alien invasion? John is a war hero, not a scientist? No Dr. Smith? No robot? It was one of those dumb shows/movies that only has the title in common: Hollywood has a list too long to print.

You’ve all been warned. I will be incommunicado from April 13-15 bingewatching a show which has had untapped potential for over 60 years. May Irwin Allen, Guy Williams and Dick Tuffield’s ghosts approve.

This entry was posted in TV and tagged Netflix Original, Reboot, Science Fiction. Bookmark the permalink.