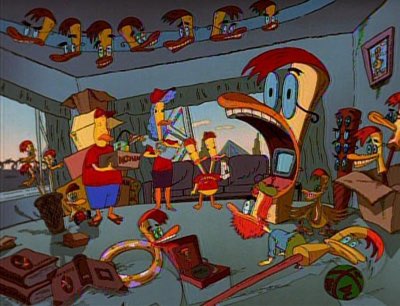 This odd cartoon from Klasky-Csupo (most famous for making Rugrats) made its debut on USA alongside Weird Science the Series. I think USA was trying to branch out into what we would call a more general “network/channel” like TNT or (W)TBS and WGN are now.

I was surprised that USA went with such an obscure comic book character. I had only seen him a couple times in Dark Horse compilations. The strips from creator Everett Peck were funny but the humor was cruel plus the style seemed impossible to animate. Somehow Klasky-Csupo found a way to streamline Peck’s numerous lines and get Jason Alexander to be the voice of Duckman. The remaining cast members were professional voice actors with recurring appearances of Tim Curry as King Chicken (the main nemesis) and A-list guests: Robert Klein, Katey Sagal, Leonard Nimoy, Sheena Easton, Burt Reynolds, Joe Walsh, Eugene Levy, Andrea Martin, Kathy Ireland, Ice-T, Ben Stiller, Amanda Plummer and Bob Guccione. Duckman was denser with guests in its four-year run than The Simpsons at the time. Maybe this was something the show’s producers were hoping to get it to succeed.

Sadly the cartoon’s biggest problem in finding its audience was its time slot, usually late Friday or Saturday evenings. Time-shifted viewing only existed through VCRs so this didn’t help much. Comedy Central carried it briefly in the Aughts but Duckman suffered from a few episodes being tied to current events plus I don’t recall it being on during good time slots. [adult swim] probably passed because the show was made my Paramount and the former was a Time Warner network.

I’m probably dodging the main question. Was it funny? Hell yes! A standard episode tended to focus on Duckman’s selfish, hedonistic behavior that often got in the way of his alleged career…private detective. Thankfully his partner Cornfed is the competent employee and his sister-in-law Bernice (nemesis number two) handles his children Charles, Mambo and Ajax along with a vegetative mother-in-law who communicates by farting. Duckman following his carnal urges would either lead to a client, an enemy (often King Chicken), both or something crazier. Much of the humor was wrapped around a bigger issue: stand-up comedy sucking, pollution, his mother being reincarnated, women’s prisons, guilt over his wife dying, how corporations profit on cancer, Ajax becomes a greeting-card writer, immediate decisions having long-term consequences, etc. The cartoon was ahead of its time too as it paved the way for other shows with real miscreants in the lead: It’s Always Sunny in Philadelphia, AP Bio, The Mick, Squidbillies, Aqua Teen Hunger Force and Rick & Morty readily come to mind.

No sign of Duckman appearing on the big three streaming services. YouTube has some episodes posted, illegally. I lucked out a decade ago and scored both DVD sets before the major studios scaled back on making such things. If you’re ever interested, let me know. I can find them and loan them to you.