D&D weapons of war part one 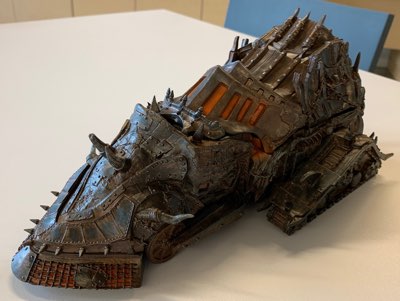 In preparation for D&D’s upcoming campaign involving Avernus, one of the nine planes of Hell, the minis people created this helltank which is really an armored personnel carrier (APC). But who cares! It’s awesome. It’s covered in spikes. Metallic all over. Coming from the Nine Hells, it’s probably searing to the touch. It’s a pretty cool mini too. Unlike Games Workshop’s Warhammer line, I didn’t have to assemble or paint this and I have a feeling I paid much, much less; it retails for $70. 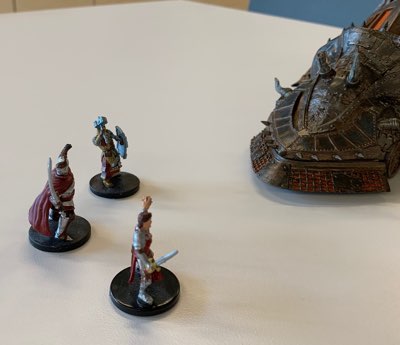 Some good guys trying to stop the helltank

Given I prefer the Pathfinder rules and utilize its campaign world, now called Lost Omens because I’m guessing it was easier to market than Golarion (the planet), this could easily be repurposed by the devil-aligned nation Cheliax! Get a minor devil or tiefling as the driver and hell knights as the troopers. 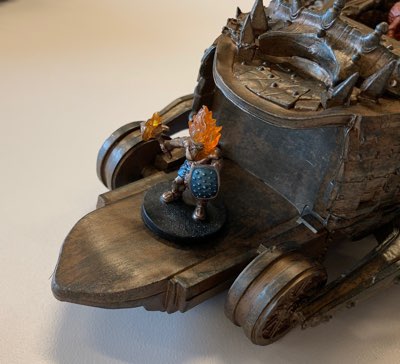 My coworker loaned me an Azer as the driver. Not evil but it is a fire elemental of sorts.

The picture above shows how the driver’s compartment detaches so you can put in a mini to represent the driver. It’s not a self-driving tank which I guess would make it less evil than the Uber responsible for killing someone in Phoenix. Being from the Nine Hells, I could make the argument of it being alive though. 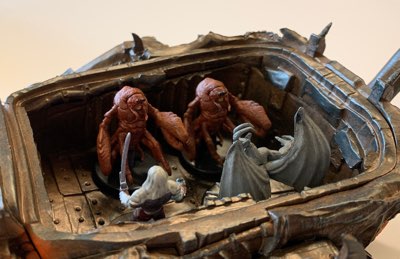 The final picture above this paragraph demonstrates another removable “lid” for me to put in evil, hell-bound troopers. In league with the sentient argument, I could argue this compartment is where the vehicle’s guts and brains are stored, similar to Cylon star fighters in the 2003 version of BSG.

Can’t wait to spring this on my players. Whenever we get the Plan A campaign back on track, the adventures of Opal & Seilu!

This entry was posted in D & D and tagged Fantasy. Bookmark the permalink.