The Life of Brian…still hilarious and relevant 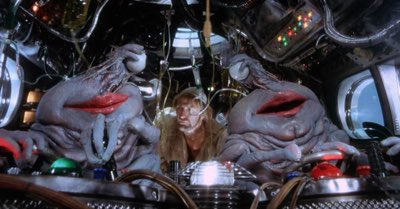 Only fitting to watch this flick on Easter weekend! It’s the grown-up and Atheist alternative to being raised with sitting through Moses and the Ten Commandments on ABC every Easter night. It’s also the first movie I heard of to be condemned by the Catholic Church. Obviously, past Popes and their stodgy, humorless, clueless prudes gave this “rating” to dozens of movies well before 1979. I just didn’t know about such a system because I had always known about the MPAA; R meant, it was dirty and there was no way in hell I’d get to see it…unless the parents were asleep and we knew when it would be on HBO! One afternoon, my dad explained it all to me and how it worked until the late Sixties with the MPAA’s system. By the late Seventies, even Catholics didn’t give two craps what the Church thought of a movie. Hell my parents ditched us into Watership Down so they could see Animal House. Nice job Pope Paul VI!

Leave it to the Pythons to do a parody on the life of Jesus. After what I learned in Theology at Marquette, what they did was tame; many KKKristians’ heads explode when they learn there were three to four others claiming to be the Messiah around 30-35 AD. The movie is a much deeper satire than just pointing out how Jesus is really a myth and mocking Christianity; Brian tells people to think for themselves and yet many don’t want to. It’s also a sendup of all those big Sixties productions of the Romans being noble, hence the lisps with Pilate and Bigus Dickus. Then throw in the ridiculing of Far Left Terrorist groups such as the PLO, IRA, Red Army, etc. as they spend more time talking and meeting than acting; there’s something I have to give the Far Right credit for but remember, there isn’t any real intellectualism within their numbers, just violence.

When I went to see John Cleese last year, he told the story about how the Pythons couldn’t get any production company to finance this until George Harrison mortgaged his house. When asked why he did this, Harrison replied, “Because I want to see the movie.” Pretty solid explanation and it lead to the making of Time Bandits via George’s production company.

Having being stuck with taking Latin in high school, the movie’s best joke is this clip below. Now I wasn’t instructed by a cruel English schoolmaster, I can only relate in how clunky and esoteric Latin is when it comes to forming a routine sentence in English. It’s why I have a shirt of this gag.

This entry was posted in Movies, On the TV and tagged Comedy, Monty Python, Religion, Satire, Seventies. Bookmark the permalink.