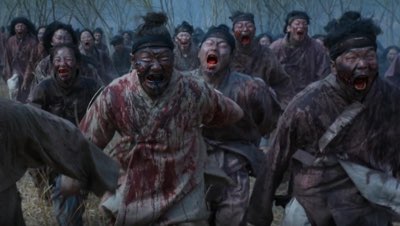 When I thought nothing more could be done with the Zombie trope, this joint Netflix-Korean production proved me wrong. The zombies are more like ghouls since they can run and you must watch the series through its first two seasons to find the explanation on how this contagion spreads and where it originates from.

Set in the 17th Century by my estimates; soldiers have flintlock rifles, mentions of a Japanese invasion several years; the empire is at a critical crossroads. The emperor married a woman half his age and when (and if) she gives birth to a son, there will be a definitive heir. There’s a couple problems with this scenario. He has an adult son Chang is the current crown prince but he will be ineligible due to his mother being a concubine. The fate of such children tends to be exile or execution. The other dilemma is the empress’ family, the very ambitious Cho Clan that is slowly taking control of the day-to-day administration as its leader purges the neutral bureaucracy.

Now the emperor hides away in his inner palace where few see him through the machinations of Hak Joo Cho (the clan’s leader). It’s unclear if the emperor died of illness or was murdered (it’s irrelevant), he’s now a ghoulish people-eating monster who awakes at sunset to feed. Hak Joo just needs everyone to believe the emperor is alive until the empress gives birth, then he will be the real power behind the throne via regency.

The plan goes awry when a victim’s corpse is sent home to their original province where the national famine is pretty intense; Korea may have repelled the Japanese invasion yet its aftermath continues to plague the non-aristocratic citizens. Due to their desperation for anything to eat, someone decided to cook the previously mentioned corpse shortly after its arrival, claim it was game and now flesh-eating zombies (or ghouls) arise from the diners.

By some coincidence, Prince Chang heads for the affected province, seeking a doctor who used to be his father’s personal physician. Maybe this doctor can say why he was dismissed, dispel the mystery in the palace. Instead, Chang is thrust into a position of leadership he never wanted as he bands together a ragtag army of peasants, his bodyguard, “monks,” a female doctor and a Hak Joo’s bumbling nephew in a plan to save Korea from the duel menaces: zombies and the Cho Clan.

I stumbled upon this thinking it was Chinese, maybe a typical youxia or wuxia piece Netflix chipped in on. Once I got the right audio to sync up with everybody’s mouths, I was pleasantly surprised it was Korean. It explained the Chinese-like fashions while the swords were definitely the Japanese-styled katana. Kingdom has the right mix of Action, Drama, Intrigue and Suspense to keep you hooked…letting the “next episode starting in …” button kick in to see what’s next! I was very lucky. I was addicted a week before the second season rolled out so I didn’t have to wait very long to see how it would pan out. Much like You and Westworld (a much later story for me), Kingdom does have a satisfying conclusion with an opening for a possible third season should Netflix do it.

If you hate this, tell me. I will reimburse you your time in snacks based upon on how many episodes you managed to complete. Hell, I would recommend you just finish it and maybe you’ll change your mind if you aren’t convinced. Maybe The Walking Dead could regain its mojo by having the writes see Kingdom.