First royal flush I’ve seen in 17 years and this time, it’s mine!

I remember the first time I saw someone get a royal flush at video poker. It was during my four weeks of living in Las Vegas for PowerComputing. We ate dinner at Caesar’s Palace and afterwards we played the game near the sports book. I spent $10 figuring, how hard could this be? Pretty hard when you make the mistake of using the same strategy one uses against other opponents. Meaning? Any pair lower than Jacks are often a wasted effort because you’re better off discarding them due to the odds of either a second pair or a three-of-a-kind being slimmer than getting a pair of Jacks, Queens, Kings or Aces when receiving five new cards.

Anyway, I lost my money relatively easily and chalked the experience up to saying it was the most expensive beer I ever drank, comp my ass. Kris had better luck, she got the elusive victory that night and walked away with $100 in quarters. It was 1997, Vegas still dispensed coins into plastic cups. I saw it happen again several weeks later at Orleans watching some stranger playing at the bar.

Every trip since, whether it was me, Somara, a friend or watching a stranger play, I never saw another royal flush. I did finally learn some new strategies. I can’t recall if I read it, heard it or what. I’m even willing to admit it may have come from the horrible podcast Five Hundy by Midnight (holy crap! Dressen continues his drivel every week!). I tested the new approach on our 2006 vacation and it worked. It was touch-and-go as I was down to a mere couple bucks but the four-of-a-kind put me in the black. The plan?

Yesterday was the crowning achievement and it’s burned permanently into my memory. The opening deal was the Jack of Diamonds, Ace of Hearts and all the Hearts Royalty. The conservative/pessimist/buzzkill move would’ve been to keep the pair of Jacks. I really doubt any human being wouldn’t have taken the chance though…it is gambling. I agreed as I thought, what the hell, the odds were 46:1 against. Gotta’ love the sound of being right! According to what I could find, the odds for the entire hand even happening are 40,000:1 against or once every 133 hours of continuous play.

What’s the plan for the winnings? Put it toward paying off the timeshare we stay in whenever we visit Las Vegas. 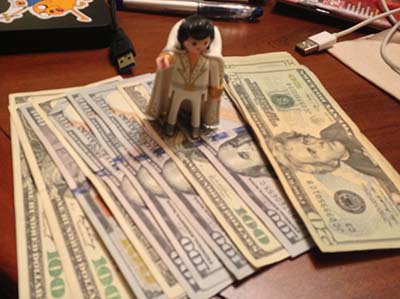 He wasn’t present but he wants to give his approval.

This entry was posted in News, Pictures and tagged Las Vegas, Vacation. Bookmark the permalink.

One Response to First royal flush I’ve seen in 17 years and this time, it’s mine!