From Dusk Till Dawn: The Series 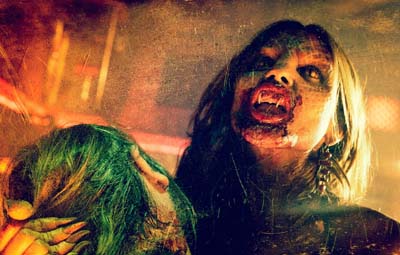 The Rodriguez-Tarantino team up from 20 years ago became a serialized TV show for Rodriguez’s cable channel El Rey. Recently the second season was posted on Netflix so I decided to check it out because I needed to trying something new, I was getting into the bad habit of re-watching Futurama and Bob’s Burgers and Star Trek: NG became a serious chore around the fourth season…I’ll get back to it, I promise.

The third season will kick off next month on El Rey. I have no idea how long it will take to appear on Netflix. Hopefully not so long that I will have to re-watch the 20 episodes to remember what the hell was going on.

I did complete the first season, a mere 10 episodes. Here the same plot from the movie is extended out to about 450 minutes. To fill the time we see more backstory on the Gecko Brothers and the fallen preacher with his two teens headed for Mexico. In addition there’s a Texas Ranger pursuing the Geckos who joins the story arc and we get to know the primary vampire running the hangout. I’m not spoiling this element I’m about to mention. Instead of the villains being just vampires, they’re really a snake-vampire hybrid called culebras. They remind me of the D&D monsters called yuan-ti. Culebras have vampire weaknesses: they burn in sunlight, they need to feed on blood, they regenerate, they’re killed with a direct piercing in the heart and they can convert victims into their kind. The latter has a condition, the target must receive the venom to turn into a culebra-vampire.

The plot is more elaborate than the movie too.

With El Rey being a cable channel, it means they have a very different Standards & Practice than say Comedy Central or AMC. The show uses the F word, it can be a tad gorier than The Walking Dead and occasionally you see bewwwwwbs to borrow the catchphrase from Honest Trailers. Thus, it’s not really wise to let young kids watch this. I think it will give them nightmares too.

The first season wrapped up around what the movie could provide. The second season picks up three months later. I have never watched the direct-to-video sequels so I cannot compare them. I suspect Rodriguez and the writers chose to go another direction. I won’t spoil it though. I will say you’ll be rewarded for completing the first season which I felt had a decent ending if the show wasn’t continued. The second season? It’s plausible on what the core characters decide to do next given the first’s conclusion. I have one more episode to watch with season two. I’m confident it will be more open since I think Dusk was already renewed to have a third go before two aired.

I recommend this show for Horror fans and those who enjoyed the original movie. Given how much zombies have been done to death, vampires have become boring glittery placeholders for whacky Mormon mythology and werewolves being some MTV schlock; I’m grateful Rodriguez brought vampires back to their rightful place, untrustworthy monsters.

This entry was posted in Diversions, TV and tagged Horror. Bookmark the permalink.

One Response to From Dusk Till Dawn: The Series