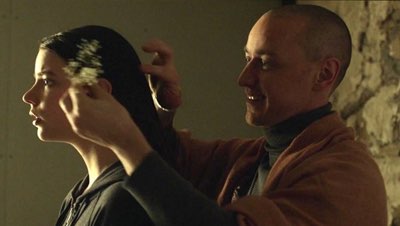 With Glass coming out in January and it being a sequel to Unbreakable and this, I modified our Amazon Prime account to have Cinemax for one week (free) to find how Split connects the other two. Personally I have left M. Night for dead after Unbreakable because  he ruined that movie with the ending. If you have seen Unbreakable, you’d agree the whole thing goes into the crapper thanks to the “explanation.” Another reason why I didn’t bother to see Split earlier is its premise, multiple personality disorder is utter fiction and has been disproven so many times.

However, McAvoy does demonstrate some good range with the various personalities orchestrating a very weird kidnapping of three teenagers (young women in their early twenties as per Hollywood’s obsession with body types). The trio has every right to be scared since they figure the villain plans something horrible yet the different personalties turn up at random keeping them on edge. They also can’t get a good plan rolling due to one girl, Casey, who utilizes her experience/status as a loaner to study their captor, find a personality willing to cooperate in their escape. There’s flashbacks peppered in of Casey’s time as a child going on hunting trips with her father and molesting uncle. So M. Night has telegraphed the audience a future explanation for Casey’s skill with a rifle.

It wouldn’t be a complete tragedy without the naive Academic treating the villain. Dr. Fletcher is more fascinated by him as a patient and what she’ll be writing about him for the journals, she’s too oblivious to warn authorities. Can’t have a Thriller or Horror movie sans the gullible scientist!

Split is mediocre at best thanks to previous Horror franchise Saw and numerous uncomfortable flicks involving people chained up in a basement. These disgusting kidnappings occur in the real life too, ugh. My other peeve is the actress playing Casey, she’s a graduate of the Kristin Stewart Acting School, she only has one expression on her face through most of the movie. It’s better than Stewart’s “who farted?” face but not much better, I think she’s pondering her next Starbucks drink. I saw she’ll be back in Glass when I watched an extended trailer.

Let’s see if M. Night can pull it off with his shared universe in Glass or will he waste Jackson and McCoy’s talents.

This entry was posted in Movies, On the TV and tagged Thriller. Bookmark the permalink.