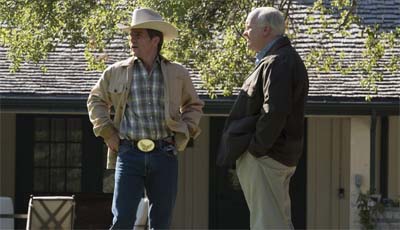 Hard to believe that McKay could make a Dark Comedy about war criminal Dick Cheney but he succeeds in making his point, this horrible man was the main architect behind America’s problems abroad and at home. I’ll explain more of this later.

The story begins with Cheney getting busted for his second DUI in Wyoming around the early Sixties. Then it juxtaposes to 9/11 when the shitstorm went down and he was calling the shots, not the president, while consulting his legal counsel first…before State (Powell), Defense (Rumsfeld), the CIA (Tennant) or the NSA (Rice). Back to Wyoming with the narrator (a mysterious Jesse Plemons) explaining how a drunk dirtbag who bombed out of Yale, received five deferments to avoid the Vietnam War and got by as a telephone lineman, somehow became the most powerful Vice President in US History.

Well, we can blame/credit his equally evil, power-hungry wife Lynne. Her father is an abusive drunk and she gives Dick an ultimatum to straighten up and fly right. Jump forward to 1969 as he lands a Congressional internship which introduces him to Congressman Donald Rumsfeld. This enabled Cheney to land bigger responsibilities by hitching his future to Rumsfeld’s rise in the Tricky Dick administration and later becoming President Klutz’s Chief of Staff, the youngest person to hold the job at the time.

If you want to know what he did until 2000, see the movie and/or check Wikipedia.

The key scenes are when candidate Dubious Bush is now the Republican nominee for president. Dubious and his handlers (probably Turd Blossom Rove) want Cheney to balance out the ticket via experience since the Governor of Texas is a figurehead position and Dubious is a lightweight in every subject. Cheney doesn’t want the job but is willing to hear the pitch. He remains uninterested because he’s making millions as the CEO of war-profiteering Halliburton and VP is a symbolic job. Cheney is willing to help lead the search for a VP. According to the trailer, he finally accepts the position of running mate by allegedly tricking Dubious into delegating policy regarding Defense, Energy, foreign policy and the bureaucracy to him. I wouldn’t call it tricking. Dubious lacked the intellectual capability to really govern and probably found the details boring, a similar modus operandi St. Reagan and the current Shitgibbon in the White House have.

While he’s veep, Cheney uses legal chicanery with his hand-picked staff to undermine environmental policy, transparency (especially when meeting with energy corporations), Orwellian language to lower taxes for the rich, relabel torture (enhanced interrogation), spy on American citizens through warrantless wiretaps/packet sniffing and create bullshit “evidence” on Iraq having nuclear weapons. In short, damage America’s international reputation further as we continue to lose blood and treasure with no end in sight.

Cheney goes back under this slimy rock after the election of Obama, occasionally crawling out to be an armchair quarterback, fundraise, support gay marriage for his younger daughter (Republicans only have empathy when it affects them personally) or help establish a dynasty via the older daughter being Wyoming’s sole House representative. He later received a heart transplant at 71 since he is rich and important; a regular plebeian would die as per our Insurance Industry’s Death Panels, especially given the patient’s age.

Vice ends with Christian Bale/Dick Cheney turning to the camera and telling the audience why he’ll never apologize for his war crimes, expanding dictatorial powers to the executive branch (the Unitary Executive Theory bullshit) and making most Americans economically worse off. Ironically, he even says it was an honor to be a public servant for us. A public servant who lined his pockets liberally; Halliburton stock rose 500% through his actions.

Bale’s performance is creepy too. Often Cheney is compared to Darth Vader. This is inaccurate. Vader was a villain of action and misguided by his perception of order/peace. Cheney is Darth Sidious/Emperor Palpatine, an underhanded, power-hungry asshole who wrote an addendum to The Prince. Adams redeems her boring Lois Lane as the evil Lynne Cheney. She nails the whole “woe is me” victimhood right wingers have just through her litany of “whenever you have power, someone will try to take it away from you” and we all know the someone means Democrats, Liberals, Unions, non-Whites, Catholics and Jews. Carell’s Rumsfeld is fine, he has the evil just not the voice. Rockwell’s Dubious is funny and I can still hear his F is for Family‘s Vic voice coming through. He does a good job imitating Dubious’ infamous befuddled look when he was stumped. You’ll see other members of Cheney’s brotherhood of evil throughout the story: Roger Ailes, Antonin Scalia, Paul Wolfowitz, John Yoo, Grover Norquist and Scooter Libby.

How does Jesse Plemons as the narrator fit in? You’ll see as it progresses, seeing him in numerous roles running concurrently with Cheney’s time as veep.

McKay utilizes other story-telling techniques from The Big Short to illustrate a few things Cheney did. Remember it’s a Dark Comedy. There will be unusual jokes, symbolism through Cheney’s favorite hobby (fly fishing) and don’t leave when the credits roll. Why? All I will hint at is McKay borrowing from the Marvel Universe’s playbook.

In conclusion, Republicans will hate this movie and scream their usual “Liberal Bias! Liberal Hollywood!” Centrists I’m sure will be all over the place due to their spineless nature. The Opposition will laugh and cringe simultaneously much like I always do when watching Idiocracy. I won’t deny there are few inaccuracies (I checked) McKay probably went with to improve the narrative. Compared to the whitewashing Cheney has promoted (if I hear one more person praising the Dubious years in comparison to the Shitgibbon, I will scream) with the help of his brood, McKay nails it. Besides, the Republicans continue to harp on about Bilary’s missing e-mails as they overlook the millions Cheney refused to archive while utilizing the RNC’s servers for official VP business. He needs to be locked up.

Alamo Extras: Betty Boop for President cartoon; Trailers for Orson Welles’ Macbeth, Richard Burton doing Hamlet, The President’s Analyst and The Kidnapping of the President; Sergio Mendes and Brasil ’66 covering “Wichita Lineman” (incredible female harmonizing); Saint Reagan and his daughter Patti plugging Boraxo Soap; commercial for Weber’s bread with a promotion of Snoopy for President; a Bicentennial celebration cartoon; It’s Garry Shandling Show celebrating Michael Dukakis winning (they already knew he’d lose is the joke); Tim & Eric doing a bit on running for president in 2012; commercial for the board game Risk; Family Guy snippet of Cheney as a failed Wal-Mart greeter because he tells everyone to go F themselves (like he really did to Senator Patrick Leahy, such a class act); some guy who does a magic trick without exposing his junk; lastly, Alamo had a quiz to see if you could name the movie, the name of the president, the vice president and the actors playing the parts. I only got the first one right, it was the only one based upon history, four were fictional and the last is a documentary. I’m  just going to list the movies, you can look up the rest on IMDB.

This entry was posted in In Theaters, Movies and tagged Aughts, Dark Comedy, Politics. Bookmark the permalink.