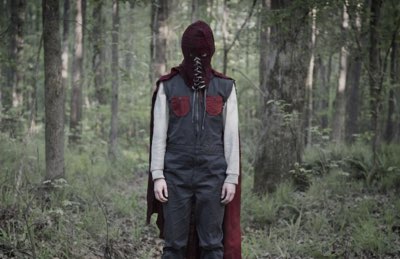 An unusual combination of a Superhero origin story that transforms into a Horror movie. Not an easy feat but the people behind it succeed. Be warned, it did get pretty gruesome in how the victims meet their grisly fates.

The short version of Brightburn, take Superman’s beginnings and instead of Ma and Pa Kent raising Kal-El to embody their ideals: Truth, Justice and American Way…they’re slightly younger, Ma is overprotective and they find baby General Zod in the alien spacecraft that fateful day. The first 12 years with him are great. When he’s reaching puberty which entails awkwardness with girls and talking back to authority are how the crisis begins. Not a good situation to be in if your son is invulnerable, flies and has the moral compass of Boris Johnson.

Alamo Extras: Snippets from Superman‘s Fifties show; Trailers for The Children, Teenagers from Outer Space and Village of the Damned; “Woodpeckers from Space” music video by Video Kids; commercial for Creepy Crawlers in the Seventies; scenes from Superman the Musical (last Sixties was when it was written I think); and the hilariously awful “Crop Circles” music/song video by Gregg Brown.

This entry was posted in Comic Books, In Theaters, Movies and tagged Horror, Superheroes. Bookmark the permalink.