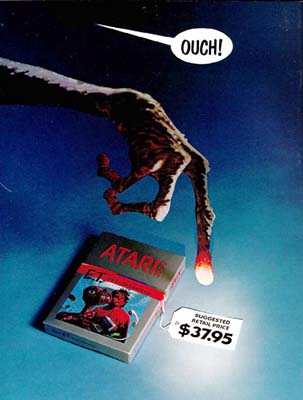 To give you an idea about the joke from the back cover of MAD in 1982, that $38 suggested price for one of the worst video games ever made would be $90. I thought the new PS4 and XboxOne stuff jumping to $60 was robbery.

After years of speculating, the rumors have proven to be (mostly) true about Atari dumping thousands of the unsold cartridges into a landfill. I beg to differ with the Guardian about ET causing the Atari 2600’s downfall. The revered console continued to be manufactured and sold until 1990. The home console slump happened more from “too much of a good thing.” Plus ET was just one of many poorly made games which turned people off. Atari didn’t control who had a cartridge “burner” so it’s how an X-rated game was made along with the crappy Parker Brothers’ adaptations.

I’m glad they did find these discarded things. I’ve loosely followed the rumor for over a decade. I leaned toward believing it because in America, it’s just cheaper to piss away resources into a hole instead of recycling the materials.

This entry was posted in Arcade Games, Console and tagged Eighties, Urban Legend. Bookmark the permalink.