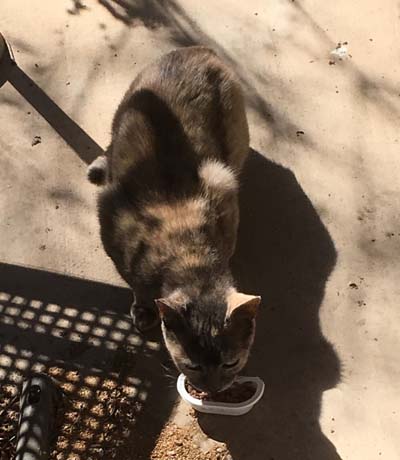 Just as Nature abhors a vacuum, whenever one stray cat is removed (usually adopted), another takes up the vacancy. Over the years, various cats have used our back porch to sun themselves or as an impromptu shelter, especially during the Winter months; I still left out the cat cave for Miguel (no sign of him in a long time).

I knew there were new cats hanging around because Kuroneko looks for them when she stares out the back door. (She isn’t as vocal as Molly was but is equally territorial, Kuroneko often bites Isis whenever there’s a dispute over space on our bed.) Sometimes in the evenings I can hear the strays meowing for some reason, maybe to say “howdy” to Kuroneko. Other times I will catch one of several cats fleeing our yard or the undercarriage of the cars.

Several days ago I found this little lady (a tortie) in the cat cave and another tan tabby lying around. The latter fled immediately while she remained at the porch’s edge. So I lured her in with some wet food Nemo won’t eat (he’s on a special diet due to his elderly status). Poor thing licked it down to the last drop.

After several days, I successfully grabbed her by the scruff. This resulted in serious hissing and a demonstration of how strong she is. Next time, I’m wearing gloves to protect myself from any possible scratching (I lucked out this time). I’m confident she’ll come back.

I’ve decided to name her Satine. For Star Wars fans, the name should be recognizable. Duchess Satine was Mandalore’s head of state during the Clone Wars and probably Obi-Wan’s unrequited love interest, silly Jedi rules. I like it better than the working “title” I had given her, Chani, who was Paul’s girlfriend in Dune.

More as it happens. And no, I will not be adopting her despite being a huge fan of tortoise-shell cats ever since the first one I loved in my life, Mewsette, one of my cats from my high school days.

This entry was posted in Cats and tagged Star Wars, Strays. Bookmark the permalink.