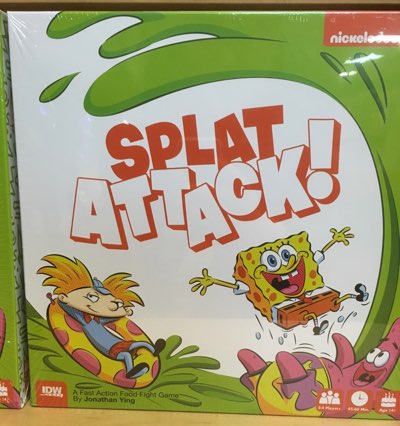 Initially, I would be wary of a game based solely upon licensed characters because most aren’t very good. Others are just another game with the IP glued on top (Clue, Monopoly, Risk). I do have to give credit to Love Letter and Flux, the rules differ by license. I’m also guessing Splat Attack! is aimed an Millennials too since these are the cartoons many grew up with in the Nineties and early Aughts. There’s a silver lining to this game though. Even if it sucks, it comes with 16 really well-made plastic miniature figures of the shows used in it: Spongebob Squarepants (Spongebob, Patrick, Squidward and Sandy), Hey Arnold! (Arnold, Harold, Helga and Phoebe), Rugrats (Tommy, Chuckie, Angelica and Susie) and the piece de resistance…Invader Zim (Zim, GIR, Dib and Gaz). The premise to the game is rather appropriate, a food fight between the four teams and the winner is determined by who is the coolest. Can’t wait to play.

I’m hoping Splat Attack! is a success and publisher IDW adds expansion packs: Rocket Power, Rocko’s Modern Life, Ahh! Real Monsters, Jimmy Neutron, Danny Phantom, As Told by Ginger, CatDog and Fairly Odd Parents are the next logical choice. I would love My Life as a Teenage Robot too but it wasn’t a super successful show.