The Hobbit part three Worth Seeing* 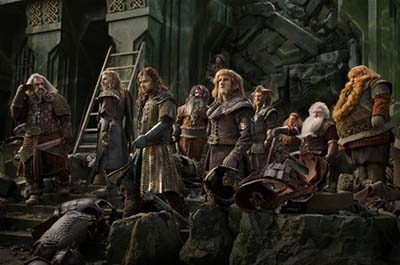 * – Once again my caveat on  the “Worth Seeing” rating sticks around to warn those who aren’t familiar or enthused about Tolkien’s better works being brought to life for three hours at a stretch. This time though, even I was exhausted.

Battle begins with Smaug flying out of the Lonely Mountain to burn down the nearby human settlement of Lake Town. Since the last movie telegraphed how the dragon would be defeated, Bard succeeds via a ballista missile through an opening in Smaug’s scales. The dwarves figure they’re quest is over too. With the dragon gone, Thorin can reclaim his birthright as king of the mountain and re-establish the realm.

There wouldn’t be any three-hour movie if it were this easy. Firstly, the humans flee to the mountain because it could shelter them for the winter; they’re not too interested in its wealth. Thorin tells Bard and the villagers to screw off. Secondly, the wood-elf king Thranduil (who was a dick to the heroes in Smaug) arrives with an army to reclaim some of the wealth he says is his. The wood elves provide the human refugees supplies as well and in return Bard’s people join Thranduil in forcing Thorin out. Thirdly, Thorin manages to get a crow courier to his cousin King Dain Ironfoot (the ever comical Billy Connolly) who brings 500 experienced Dwarven warriors to confront the humans and elves. Lastly, Thorin just can’t be reasoned with anyway. He has been driven to the edge of madness over the Arkenstone not being amongst the dragon’s horde, remember that Bilbo pocketed it in Smaug.

All the “good” guys finally come together as one force thanks to those Goblins/Orcs who’ve been chasing Thorin, Bilbo and the gang throughout the trilogy have arrived with a huge army. Their leader Bolg wants probably wants the horde but I think he’s more interested in killing off Thorin’s family line. Who know, Tolkien’s villains don’t always have understandable objectives beyond raw cruelty.

On paper, the amount of time needed to execute a rather iconic Fantasy battle should play out in 90-120 minutes. Sadly, it doesn’t. I haven’t seen this much padding since the female fashion trend of the Eighties! Jackson should’ve stuck to two movies.

In his defense, the comparison of The Hobbit to the Star Wars prequels is very inaccurate. Even the weakest of this trilogy remains superior to Lucas’ strongest outing, Revenge of the Sith. As I proposed with Smaug, Jackson should’ve gone with a shorter version as he did with Rings and then throw in all the extraneous jazz when the Blu-Ray/DVDs are released. I’m a fan of this stuff. However I’m a realistic fan who knows that the general public bitched last time and is easily bored, never mind the billion dollars they poured into the box office.

So again. Fans, go, endure and enjoy the triumph of our genres finally being produced and succeeded more often than failing. The completist in me was motivated to see and The Hobbit is my favorite book by Tolkien.  Non-fans, you’ve been warned.

Alamo Extras: Polish people pulling off practical jokes based upon Game of Thrones and Lord of the Rings; the horrible The Return of the King cartoon by Rankin-Bass; and The Hobbit‘s cast reading the lyrics to Leonard Nimoy’s “Bilbo Baggins” song, the IGN people edited so it came off like they were singing without auto-tune.

This entry was posted in In Theaters, Movies and tagged Fantasy. Bookmark the permalink.