The Platinum Age of Television by David Bianculli 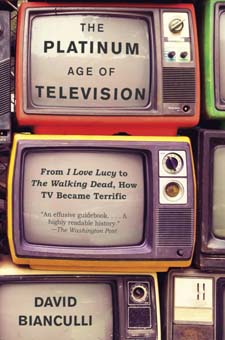 If you’re a fan of Fresh Air, then you are probably familiar with the author since he’s the TV Critic and sometimes guest host. I usually tune out the last 5-10 minutes of the show anyway because I tend not to give a crap about the music, TV, film or book reviews, they’re like The Onion‘s writers, too focused on the super obscure or Jazz remasters. However, one night, David was the guest for a change, plugging his latest book explaining that we currently live in the Platinum Age of Television. Personally, I agree. Thanks to streaming services giving experienced creators more freedom to tell stories, the cable networks and broadcasters have had to step up their game. Pay channels in the Nineties started the first onslaught yet they’re in trouble as people are ditching cable/satellite and younger adults entering the greater consumer market aren’t even bothering to subscribe. One thing I want to make clear, and the author would agree, there’s been good shows throughout the years, just tastes are subjective like it is with music and film. I wouldn’t disagree on good stuff being in short supply during some years, film is guilty of this in spades.

Bianculli dissects the good TV down into 18 general genres, highlights five ancestors over the decades that defined each genre while sprinkling in some honorable mentions. To break up the genre analyses, he has interviews with numerous creators and actors who have contributed to the evolution. He managed to get to the great Garry Handling before he died and Louis CK and Kevin Spacey before they were publicly outed as shitbags. The interview sections can be a grind if you’re just not into the guy behind The Sopranos or Mad Men. Skipping those sections won’t take away from the book’s goal.

I beg to differ on a few of his choices (I think SNL is crap and has been uneven its entire history) but I defer to his expertise in the end, plus he’s about a decade older than I am which puts him closer to the medium’s earlier development. Can’t argue with a guy who is a genuine Academic on the subject too, he teaches at Rowan University. Lastly, the man is paid to watch all this television and sometimes gets to see episodes before we do in order to have a review ready the day after. My best friend Hoser would be in paradise to land such a job. I think my brain would melt.

Platinum isn’t for everybody. I would only recommend this for my friends who love TV/Film, Joe Bob Briggs’ books, maybe TV History and/or want to know how things got to be the way they are. For example, how Hill Street Blues broke the mold on Crime/Cop shows in the Eighties and paved the way for Breaking Bad 3o years later.